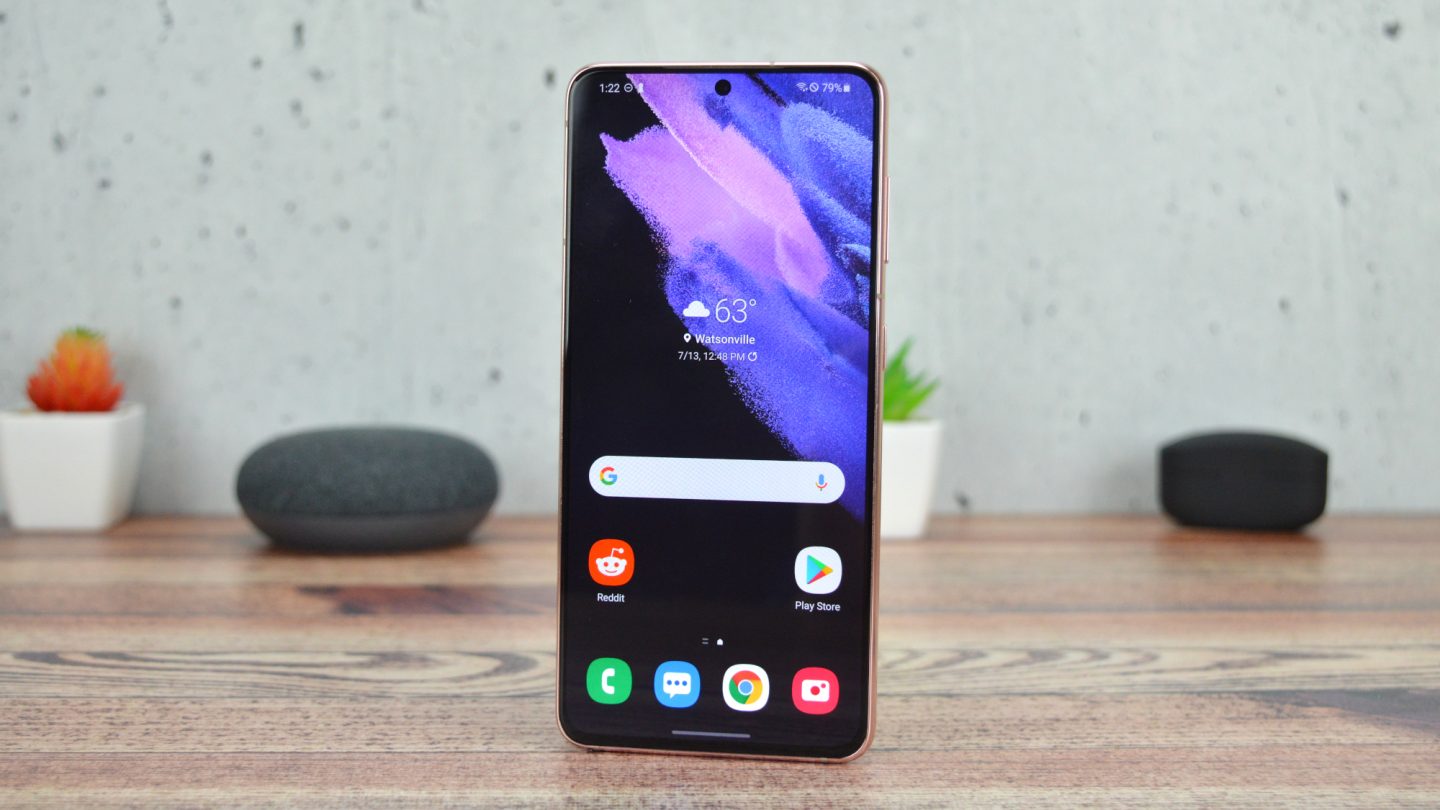 The Samsung Galaxy series is one of the best-selling flagship phone series’ out there, thanks to its excellent performance and modern design. For the Galaxy S21 series, Samsung went all out, bringing down the price of the entry-level model, and making the top-tier “Ultra” model better than ever.

The Galaxy S21 was first released in January, and at the time was easily the best Android phone out there. But since then, a ton of competition has come out, including the OnePlus 9 series and Pixel 5. That’s not even to mention the fact that devices like the Galaxy S20 FE are hundreds of dollars cheaper.

Almost six months after its initial release, is the Samsung Galaxy S21 worth buying, even at its relatively low price? Or is it already beat out by the competition? I recently picked the phone up again to find out.

As mentioned, the Samsung Galaxy S21 represents a bit of a design shift for Samsung. All of the changes made for the new phone help contribute to a more premium-looking, more modern-looking phone.

Gone is the now-boring rectangular camera module on the top left of the back of the phone. Instead, you’ll get a camera module that kind of melts into the frame of the phone, helping tie together the look as a whole. I love the concept. It’s a shift from other phones without being completely different, and it looks great. We’re reviewing the standard Galaxy S21, which has a triple camera setup. The more expensive Galaxy S21 Ultra offers an extra camera, and this a larger camera module.

The Galaxy S21 comes in a range of different colors too, and they look awesome. My personal favorite is the Phantom Violet model, which offers gold highlights. That’s the model we’re reviewing. The device also comes in Phantom Gray, Phantom White, and Phantom Pink.

Samsung has gotten some flack for using its so-called “glasstic” on the Galaxy S21, but it honestly looks and feels pretty nice. It’s soft to the touch, and at first glance, could pass as a frosted glass. Sure, it doesn’t look or feel quite as premium as actual glass, but you’ll get used to it. That’s also not to mention the fact that the use of plastic helps make the phone a little more durable.

Around the edges of the device, you’ll get a nice glossy frame, which houses the volume rocker and power button, along with the USB-C port on the bottom. There’s no headphone jack here, but those are the times we live in now.

On the front of the phone is where you’ll find the 6.2-inch edge-to-edge display, interrupted only by a hole-punch cutout for the front-facing camera on the top center of the display. It’s a great look, and using a phone like this makes me excited at the idea of Apple shrinking the notch on the iPhone series.

The display quality is very good too. On the Galaxy S21, you’ll get an AMOLED display with a 1,080p resolution and a 120Hz refresh rate. That high refresh rate helps make for a super responsive feel, and very smooth animations. Honestly, I find a high refresh rate to be much more important than a high resolution, within reason. You’ll notice a difference between the 1,080p resolution on this phone and the 1,440p resolution on the Galaxy S21 Ultra, but in day-to-day use, it doesn’t make a huge difference. The display also gets easily bright enough for most users, even in direct sunlight.

Generally speaking, the Galaxy S21 looks and feels great, plus it has an awesome display. Sure, the “glasstic” isn’t the most premium material, but it’s more than good enough.

The Galaxy S series is always one of the highest-performing out there, and the Galaxy S21 is no exception to that rule. The Samsung Galaxy S21 features a Qualcomm Snapdragon 888 processor, coupled with 8GB of RAM and either 128GB or 256GB of storage — which means it’s easily able to handle your day-to-day tasks, mobile gaming, and more.

The Snapdragon 888 is Qualcomm’s latest chip, and while it doesn’t quite reach the heights of the Apple A14 Bionic chip, it’s incredibly high-end. Samsung is generally among the first to offer a phone with Qualcomm’s latest chipsets, and the Galaxy S21 series is no exception to that rule.

The Galaxy S21 is able to load games quickly, multitask with ease, and more. It generally feels very responsive, thanks to the combination of the high-end chipset and the high refresh rate display. The Galaxy S21 comes with 8GB of RAM, which seems to be more than enough, even under heavy multitasking.

The phone performed well in benchmarks too. The device scored 1,087 in GeekBench 5’s single-core score, and 3,286 in its multi-core score, beating out all last-gen Android phones. It didn’t quite reach the heights of the OnePlus 9 series, and didn’t really get close to the iPhone 12 series, but it still performed very respectively, and should continue to perform well for at least a few years.

Under the hood, the Galaxy S21 features a 4,000mAh battery, and while you might assume that things like the new chipset and high refresh rate display make for a short battery life, the phone will easily get you through a full day of use, and into the next day. The battery life isn’t game-changing. If you game and watch videos a lot, you still might need to charge at some point. But under normal use, the battery life is good, and if you charge at night, you won’t run into any issues.

The Galaxy series has always offered among the best camera experience, and the Galaxy S21 continues that trend. While the device’s camera isn’t as high-end or premium as the Galaxy S21 Ultra, it still has a lot going for it.

On the Galaxy S21, you’ll get a 12-megapixel main camera, a 64-megapixel telephoto camera, and a 12-megapixel ultrawide camera. It’s a solid setup, and a little more versatile than many other phones in this price range, which might only have two of the three camera types.

Of course, it’s not that much more versatile. The 64-megapixel telephoto camera technically only offers 1.1x optical zoom, but thanks to the fact that it’s a higher resolution camera in the first place, Samsung rates it as having “3x hybrid zoom.” Ultimately, it’s not as impressive as the Galaxy S21 Ultra’s 10x optical zoom, but it still looks pretty good.

The Galaxy S21 is able to produce detailed, crisp photos that offer bright colors. In well-lit environments, images simply look great. They’re not quite as contrast-heavy as those captured from the Pixel series, but that’s not a good or bad thing. It’s just a difference. I like it better.

The excellent image quality continues in low-light images. Samsung has worked really hard to improve its Dark mode, and it shows. Low-light images don’t have much noise, making them look more natural and just better than much of the competition. And, zoomed-in images look pretty good too. You won’t get very much detail at 10x zoom, but at 3x, things still offer good detail.

The Galaxy S21 offers some handy camera features too. The camera can capture 8K video, or 4K video at up to 60 frames per second, plus there’s a Director’s View that allows you to switch between cameras while recording video. It’s a cool touch, though you probably won’t find yourself using it all that much.

Generally, the Galaxy S21 offers among the best camera experiences in a phone in this price range. The zoom capabilities make the phone a little more versatile than some others in this price range, like the iPhone 12, and the phone produces excellent images in almost all situations.

If you’re looking for a stock Android experience, the Galaxy S21 isn’t for you. The device comes with One UI, which is currently up to version 3.1. It’s highly tweaked, but that’s what Samsung users tend to want.

I don’t mind One UI at this point. Samsung has done a much better job at keeping it relatively clean than it did previous iterations of its operating system, and while it can feel a little cluttered at times, it’s not too bad.

That said, there are some unnecessary aspects of the software. There’s some bloatware, but not as much as there is on other Samsung phones. Thankfully, much of it can be uninstalled. That said, those plugged in to Google’s ecosystem may want to install Google versions of apps — like the Android Messages app instead of Samsung’s built-in messaging app.

Another annoying aspect of Samsung’s software is the advertisements. Default apps often have ads right at the top of the interface, and it’s frustrating. A good example of this is the weather app, which has a big ol’ banner ad right at the top. Ew.

If you’ve used a Samsung phone before, you’ll know what to expect from the Galaxy S21. If not, you’ll still be able to figure out how to get around it.

The Samsung Galaxy S21 is an excellent phone for its price. The device offers excellent performance, a great camera, and a new design that frankly looks awesome. That’s all for $800, which is $200 less than the starting price of the Galaxy S20 before it.

That’s not to say that the phone is perfect. I don’t mind the plastic back, but it is still…plastic. The display isn’t quite as crisp as the Galaxy S21 Ultra, and you won’t get the same telephoto camera. But it’s very easy to overlook those issues, given the fact that as a whole, the Galaxy S21 offers a great experience.

Perhaps the biggest competition for the Galaxy S21 comes from the OnePlus 9, which starters at $730 instead of $800. The OnePlus 9 offers a large display and a more stripped-back software experience, but the camera isn’t quite as good as that on the Galaxy S21 — though it’s close. You’ll have to figure out what’s more important to you.

The other main competitor is the iPhone 12, though few people are willing to switch between iOS and Android. The iPhone 12 doesn’t have a telephoto camera, but it will integrate with the rest of your Apple products and services, if that’s important to you.

Is the Samsung Galaxy S21 worth buying?

Yes. The Samsung Galaxy S21 is more than enough phone for most. It’s worth considering the OnePlus 9 as well, but you can’t go wrong by buying the Galaxy S21.