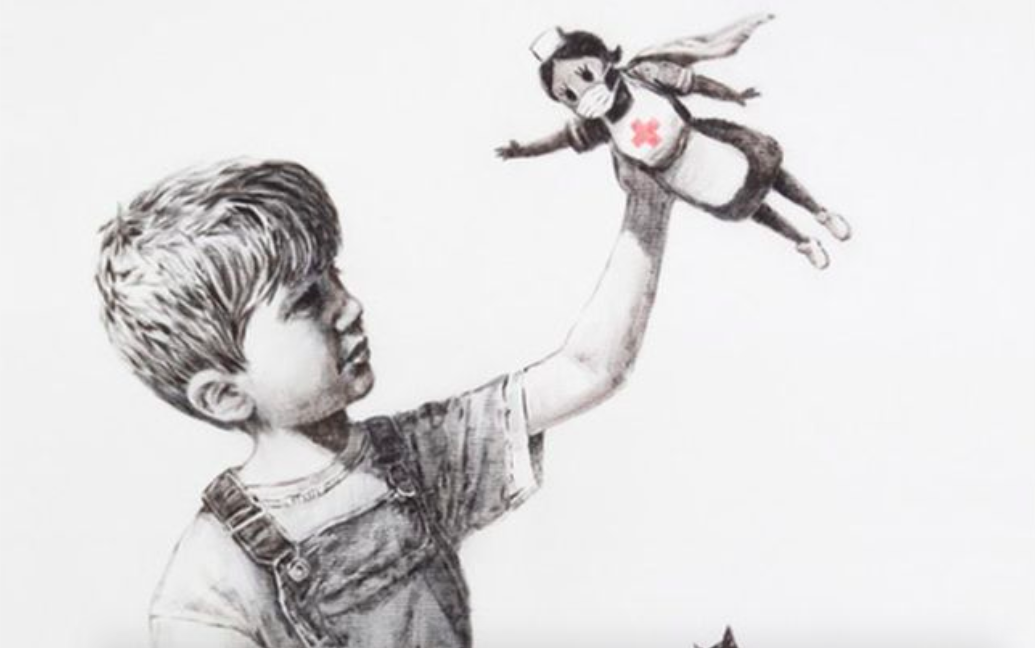 Just a couple of weeks after the famously elusive street artist Banksy unveiled his newest creation — a set of painted rats in his bathroom that reflected the quarantine home life which is now the status quo around the world, thanks to the coronavirus — he’s back with a new piece. It’s another piece that’s related to the current pandemic, but where the last one was lighthearted and fun, this one is a salute to the front-line healthcare workers risking their lives to protect us.

Banksy’s newest piece, which you can see on his Instagram account, is called Game Changer, and it’s also on display inside Southhampton general hospital in the UK. It depicts a young boy ignoring his superhero toys including Batman and Spider-Man to play with the figurine of a nurse who’s masked and wearing a cape. “Thanks for all you’re doing,” reads a note Banksy left for hospital staff. “I hope this brightens the place up a bit, even if it’s only black and white.”

The piece is eventually going to be displayed publicly for a period, and then it will be auctioned to raise money for Britain’s National Health Service charities.

Paula Head, the chief executive of University Hospital Southampton NHS foundation trust, said the following about Banksy’s new piece, according to The Guardian: “Here at Southampton, our hospital family has been directly impacted with the tragic loss of much loved and respected members of staff and friends. The fact that Banksy has chosen us to recognize the outstanding contribution everyone in and with the NHS is making, in unprecedented times, is a huge honor.”

Banksy’s previous piece, before this one, was more lighthearted and in keeping with his subversive aesthetic. It depicted the painted rats that are a familiar image in his work, and he presented them in a scene in his bathroom that showed the rodents sowing chaos — such as by stepping on toothpaste to squeeze out a blast that seems to hang in midair, grabbing a mirror to knock it askew, and painting on the walls, among other things.

As usual, Banksy’s newest artwork garnered widespread attention as soon as it was revealed on Wednesday. It quickly nabbed more than 1 million likes after it was posted to Instagram, and significant media coverage soon followed, with outlets ranging from The Guardian to the BBC all showcasing it.