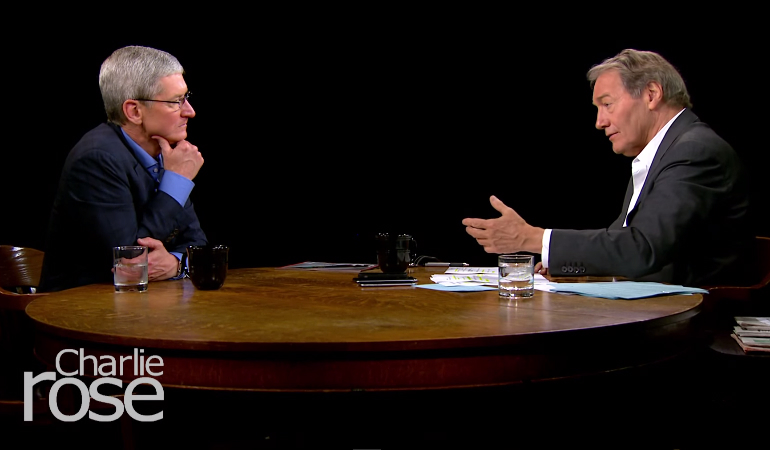 In the second part of Charlie Rose’s interview with Tim Cook, Apple’s CEO focused on the company’s stance on user privacy, with the exec saying that for Apple, the buyer isn’t the product. Cook also revealed some interesting details about Apple’s dealings with the NSA during the interview, which can be watched below.

FROM EARLIER: Tim Cook: We’re working on products ‘that haven’t been rumored yet’

“Our business is not based on having information about you,” the exec said. “You’re not our product. Our products are these, and this watch, and Macs and so forth,” Cook said, pointing out some of Apple’s most recently announced products.

Cook also took direct hits at competitors including Google and Amazon, which are sitting on troves of personal information they use to make more money.

“[W]e run a very different company. I think everyone has to ask, how do companies make their money? Follow the money. And if they’re making money mainly by collecting gobs of personal data, I think you have a right to be worried,” Cook added. The exec said he felt personally offended by the way some competing companies act, without explicitly naming any rivals, and reminding customers that on Apple Pay, Apple doesn’t want to know details about your credit card.

During the interview, Cook also wanted to address NSA’s mass surveillance practices, as well as Apple’s involvement when it comes to cooperating with authorities that demand access to personal data, again focusing on the kind of privacy Apple wants to offer customers.

“We take a very different view of this than a lot of other companies have. Our view is, when we design a new service, we try not to collect data. So we’re not reading your email. We’re not reading your iMessage. If the government laid a subpoena to get iMessages, we can’t provide it. It’s encrypted and we don’t have a key,” the exec said.

As for backdoors in iOS that agencies can use to retrieve data from devices, Cook strongly dismissed such reports. “They would have to cart us out in a box before we would [allow backdoors in our servers],” the CEO said.

To further prove that governmental agencies have little to gain from Apple’s data, Cook said that during a six month period, Apple only had to release personal data for customers at the government’s request for zero to 250 cases. “That’s the lowest number you can quote. Zero to 250,” the exec explained.

Despite Apple’s efforts, various reports have revealed that governmental agencies have very advanced tech tools that can be used to collect data from mobile devices including iOS devices, whether Apple likes it or not. A recent report explained how hackers can use such forensic software tools to mine personal data from old backups – which is what may have happened in the celebrities’ nudes scandal.

A video section of the interview, on privacy and Apple Pay, follows below.