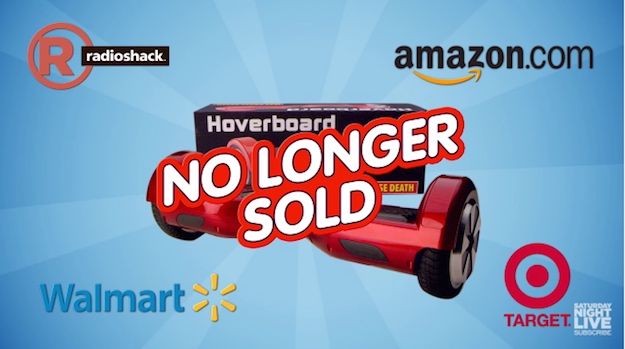 While hoverboards were seemingly on track to become the hottest tech gadget this holiday shopping season, a number of highly publicized safety incidents recently prompted retailers like Amazon and Target to temporarily pull some hoverboard models from stores.

Specifically, there have been at least 10 reports concerning hoverboards spontaneously catching fire in at least nine different states. As a result, the United States Consumer Product Safety Commission last week decided to open up an investigation into the popular self-driving scooters.

DON’T MISS: ‘Furious 7’ was the most mistake-filled movie of 2015, and it wasn’t even close

Using that as a jumping off point, Saturday Night Live over the weekend lampooned the safety risks associated with hoverboards with a hilarious digital short.

At one point, a character in the commercial asks why hoverboards explode so well. The narrator responds, “Simple, we take a battery from a 90s cellphone and make it power a motor designed for a small car.”

Shortly thereafter, the ad mentions that “since hoverboards are banned from streets and sidewalks, they’re perfect for riding in your house.” Of course, the backdrop for this bit is that riding a hoverboard on a public street in New York City was recently deemed illegal and punishable with a $200 fine.

But in the clip’s funniest line, the commercial ends with this well-placed jab: “So this Christmas, get the gift that says, “I hate walking, but love fire.”