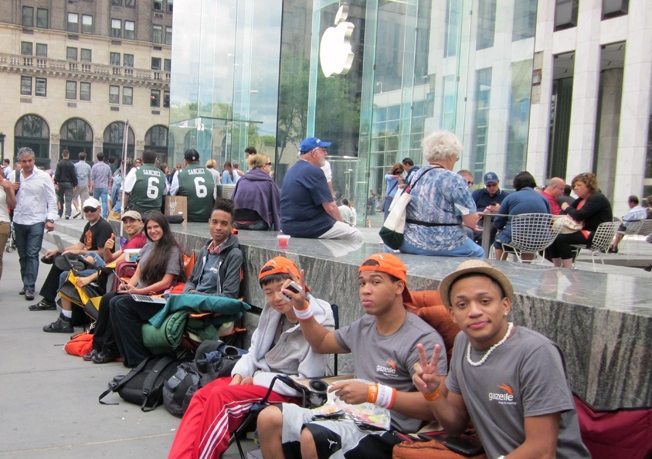 Last year ahead of Apple’s iPhone 5s and iPhone 5c launch, lines began forming outside Apple stores weeks in advance. At the time, we thought it was pretty crazy that anyone would line up that far in advance to buy a cell phone — but now we know what crazy really looks like.

A Japanese man named “Yoppy,” who The Register curiously refers to as a “fanboi,” says he has already lined up to buy Apple’s unannounced iPhone 6, which isn’t expected to launch for another seven months.

“I’m the world’s fastest queuer for the iPhone 6, and I’ve got email in English from Brazilian and UK news sites,” Yoppy wrote in a tweet translated by The Register. “Wish me luck as I have to reply.”

But wait… it gets better.

Yoppy may or may not be insane, but it also turns out he’s a blogger and a performance artist. He describes the stunt as “iPhone cosplay” on his blog and it’s doubtful that he actually plans to remain on line outside the flagship Apple Store in Japan until this coming fall when the iPhone 6 is actually released.

In the meantime, leaked photos may have just revealed the iPhone 6 for the first time. Hopefully Yoppy likes what he sees.