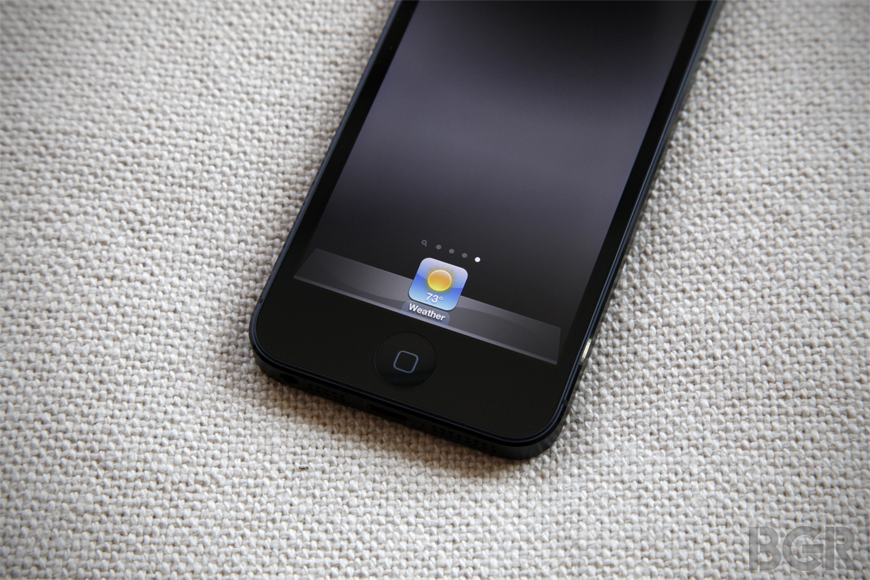 A warm front swept through the Mid-Atlantic region late last week and drove the temperature up into the nineties. It was humid and uncomfortable in New York City, but in iOS it was 73° and sunny. In the dead of winter as snow blankets the Northeast, and during sweltering summers while heat waves test our patience and our power grids, it’s always 73° and sunny in iOS. The perpetually perfect weather displayed on the iPhone’s Weather app icon is actually a profoundly apropos representation of the state of iOS itself. As other mobile platforms have continued to evolve over the past few years, iOS has in many ways remained static. And so an important question is raised as we prepare for WWDC next week: When will Apple’s smartphone finally start getting smarter again?

I’m worried about iOS 7. According to claims from several well-sourced reporters, iOS 7 is going to feature a pretty significant visual redesign that is flatter and more minimal. Apple more or less confirmed as much earlier this week. If this is in fact the case, it’s fantastic news — not because there’s anything wrong with the current user interface per se, but because after six years it’s time for something fresh. Apple is apparently working so hard on this redesign that it has pulled engineers off of OS X to help the iOS team finish on time.

I have been an iPhone owner since Apple’s first smartphone launched in 2007. I always carry multiple smartphones with me — an occupational hazard — but for nearly six years now, one of the phones in my pocket has been an iPhone.

Apple’s first iPhone was a breath of fresh air. The hardware had a premium feel that made other popular smartphones seem like cheap toys, and the software was simple and refreshing. The iPhone was missing many features that had been staples on other smartphones for years, but it was easy to see that this was the start of something big.

The iPhone 3G and iPhone 3GS took a step backwards in terms of hardware quality but they added faster data connectivity and, even more importantly, the iPhone 3G launched alongside the App Store. Smartphone apps were nothing new, of course, but buying them typically meant dealing with awful third-party mobile software vendors and clunky desktop synchronization programs. With the iOS App Store, however, users were able to  extend the functionality of their devices quickly and easily from a central location on the device itself.

Then came the iPhone 4 and iPhone 4S, which did away with plastic in favor of glass and metal. The 4 also introduced Apple’s new “Retina” display and the 4S brought the company’s intelligent virtual assistant “Siri” to market. The former sent rivals scrambling to compete in the new mobile display resolution race, while the latter ushered in a new era of smart, voice-friendly mobile services such as Google Now.

Finally, Apple’s iPhone 5 launched last year with a bigger display, an all-new aluminum design and other enhancements. It is widely regarded as the most impressive iPhone to date and is also Apple’s fastest-selling smartphone ever.

Let’s take a step back for a moment.

No company in the world has played a bigger role than Apple in shaping the smartphone industry over the past decade. The iPhone turned the industry on its head and is directly responsible for the deaths of Windows Mobile and Symbian, and it sent BlackBerry scrambling to build a new platform. IOS simplified smartphones and made them accessible to everyone; it also made the team behind Android completely rethink the awful BlackBerry-like platform they were building, forcing a metamorphosis that birthed the fantastic mobile operating system we now enjoy today. The App Store revolutionized mobile software distribution and turned a small niche market into a multibillion dollar industry practically overnight. The iPhone 4 rose the bar for smartphone hardware and prompted rivals like HTC, LG and Nokia to explore better designs and sturdier materials.

In the past couple of years however, an interesting trend has developed. While the iPhone has indeed regularly gotten more capable, sleeker, stronger, slimmer, sturdier and speedier, it hasn’t really gotten much smarter.

Here are the key new features Apple has brought to the iPhone over the past few years:

In iOS 6, Apple introduced a number of new functions but none of them really stood out as game-changers. Highlights included deeper Facebook integration; Passbook, which rolled the best features of several third-party digital wallet solutions into one Apple-branded offering; the addition of a panorama mode in the Camera app; a tragic new Apple Maps app; a new sharing menu; a redesigned Music app as well as reskinned iTunes and App Store apps; a new reject-with-SMS option for call screening; and various other tweaks.

Perhaps the introduction of multitasking features for third-party apps in iOS 4 was the last time Apple’s iPhone truly got significantly “smarter.” Smartphone multitasking was hardly a new concept in 2010, of course — multitasking is among the core features that have always made smartphones appealing — but Apple’s implementation was different. Rather than allow third-party developers carte blanche access to any and all battery-draining functions they could dream up, Apple gave them access to several APIs that would allow apps to perform only a handful of Apple-managed processes in the background. Remember when you couldn’t stream Pandora while browsing the Web or reading emails? Well those days were over thanks to Apple’s new APIs. They opened several new doors for developers, but they also ensured that the impact on battery life would be minimal.

This feature really did make the iPhone smarter.

Since then, there has been plenty of great functionality added to iOS that has improved the user experience. Siri is great when it works, though I personally believe bigger things are in store for Apple’s personal assistant. Do Not Disturb was a much-needed feature, though Apple’s implementation lacks even the most basic common-sense functionality — why aren’t there separate schedules for weekdays and weekend days, for example? Apple’s iMessage is also a nice addition to iOS but beyond syncing between devices (which is anything but consistent), this service barely matches basic SMS functionality, which was developed in the 1980s. Why can’t I leave group chats? Why can’t I block phone numbers and email addresses?

Meanwhile, rival software and platforms have really started to turn up the heat.

Since 2010, Apple’s rivals have added a number of features that made their smartphones smarter. Google’s intelligent personal assistant Google Now is a recent addition to Android that could be one of the smartest mobile products introduced in the past decade, but there are plenty of other examples. Here are two quick ones:

In 2011, Motorola debuted its Smart Actions application and it has continued to refine it ever since. This is easily one of my favorite modern smartphone features. Smart Actions builds upon the concepts laid out in dozens of third-party profile manager apps from the days of Symbian and Windows Mobile, but it is far more comprehensive and much better designed than any of those old solutions.

In a nutshell, the Smart Actions app allows users to configure their phones so that features are triggered automatically by location, time or a number of other factors. So, for example, the phone might automatically turn up its display brightness and switch from vibrate-only mode to ring mode when I connect my charger. When I go to sleep at night, Smart Actions might silence all alerts, disable background data and auto-respond to all SMS messages to let senders know that I’m not available. There is also a motion-sensing feature, however, so if I have sleep mode set to activate at 11:30 p.m. but I’m still out and about, Smart Actions will detect that the phone is being used and it will wait to enable sleep mode.

Another fantastically smart addition to an Apple rival’s smartphone is the HTC TV app on the HTC One. This app has seriously changed the way I watch television.

Gone are the days of flipping through guides and channel surfing. Instead, HTC and Peel have jointly created an app that shows you what’s on TV using thumbnail images and the interface automatically prioritizes shows and movies you like. Then, since the One has a built-in infrared blaster, simply tap the show you want and the One will change the channel on your TV, cable box, satellite box or TiVo — and it will work in every room on your house without having to flip through different remote profiles, since the app will send out the appropriate channel codes for each different room in your house with one tap.

There are plenty of other examples but the point has been made. Several companies out there are really pushing the envelope with their smartphone features. In recent years, however, Apple hasn’t been one of them.

Running through the list of common complaints from iOS devices users, it’s easy to see that there are many key areas where Apple has the potential to make the iPhone smarter. Developing a new power-sipping solution in lieu of full-blown widgets that might let the iPhone display zero-touch information is one example. Adding new ways to enhance communication and data-sharing between apps is another one, and it could have the same type of huge impact on Apple’s user experience that opening up background APIs to third-party developers did back in 2010. Apple’s notification system is still seriously lacking, as I have noted in the past, and there are dozens of other opportunities for Apple to improve and innovate. There are also obviously plenty of great new areas Apple could explore that users haven’t even thought of yet.

Apple is still a leader in the smartphone space, of course. No company makes more money selling smartphones than Apple. For the past few years though, Apple has not been the clear leader that it once was in terms of smartphone innovation.

I want to see Apple’s smartphone start getting smarter again.