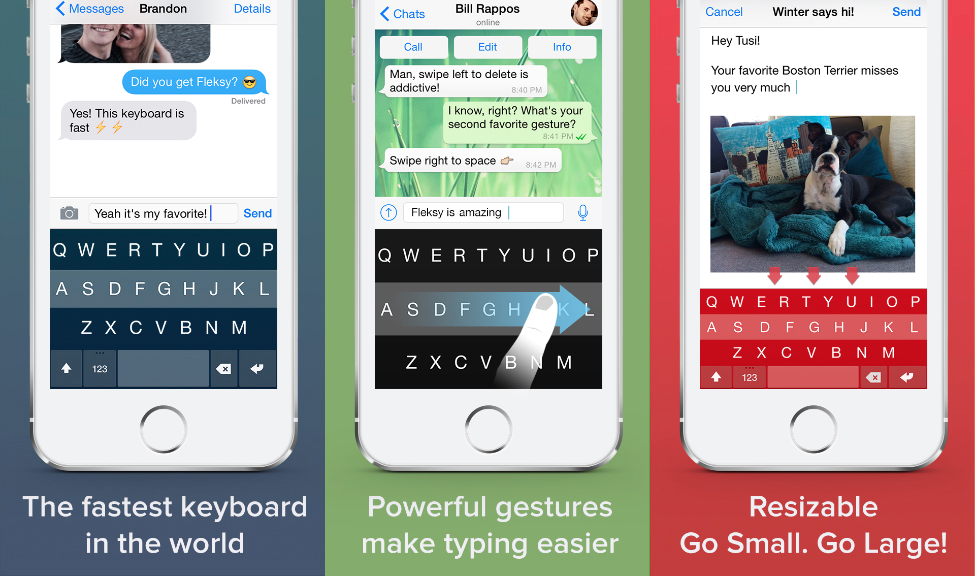 Fleksy, the fastest keyboard in the world, on Wednesday announced that its iOS 8 keyboard app is ready and waiting in the App Store to be discovered by users who upgrade their iPhones, iPads and iPod touch units to Apple’s latest operating system, also due for release on September 17. Starting with iOS 8, Apple will finally support third-party keyboard apps, a first for the OS, so it’s not surprising to see Fleksy already launch its popular smart keyboard, especially considering that the company does have a notes app in the App Store that also uses the same keyboard technology.

DON’T MISS: The 5 best new features coming to your iPhone in iOS 8

The new Fleksy iOS 8 can be used on any supported Apple mobile device, offering users “unbeatable typing speed,” smart predictions, autocorrect and support for over 40 languages.

The application also has some handy tricks, including support for colored themes, a wide range of emoji, gestures support (letting users quickly delete a word, or place a punctuation mark or space with a simple swipe) and even lets users resize the keyboard to increase the screen area that displays content while Fleksy is in use – think Minuum, but in a different way.

A set of videos showing Fleksy in action on the iPhone, and the full press release follow below, while the new iOS 8 keyboard app can be downloaded by accessing the source link. The app costs just $0.99 at launch, while an extra in-app $0.99 will unlock all premium themes.

San Francisco, CA, September 17 2014 – Fleksy, the award­-winning keyboard, has made its debut on the App Store today. It becomes one of the first third party keyboards to support the keyboard extension in iOS 8, which gives users the choice of using the native keyboard on iPhone, iPad or iPod touch, or a third-party keyboard solution, systemwide.

Launching today alongside iOS 8, Fleksy is bringing its unbeatable typing speed — the keyboard used to set the record for the ‘fastest time to type a text message on a touchscreen phone,’ according to the GUINNESS WORLD RECORDS® organization — to iOS users in over 40 languages.

“We are very excited to making our award­-winning keyboard available to iPhone, iPad and iPod touch users with the launch of iOS 8,” said Kosta Eleftheriou, Founder and CEO of Fleksy. “The combination of our keyboard’s record-­beating typing speed, clean and intuitive design, as well as customization options, make for a truly revolutionary typing experience on iOS.”

The Fleksy App is available from the App Store on iPhone, iPad and iPod touch or at http://fleksy.com/getiOS.

About Fleksy
Fleksy is a next-generation keyboard that makes typing on any smart device fast and easy.

Officially the fastest smartphone keyboard in the world (Guinness World Record, May 2014), Fleksy is already used by millions of people in over 170 countries. It features the world’s most powerful typing technology, an award winning design, and an intuitive user interface.

To download the app from the App Store, visit http://fleksy.com/getiOS.

About Apple Inc.
Apple designs Macs, the best personal computers in the world, along with OS X, iLife, iWork and professional software. Apple leads the digital music revolution with its iPods and iTunes online store. Apple has reinvented the mobile phone with its revolutionary iPhone and App Store, and is defining the future of mobile media and computing devices with iPad.