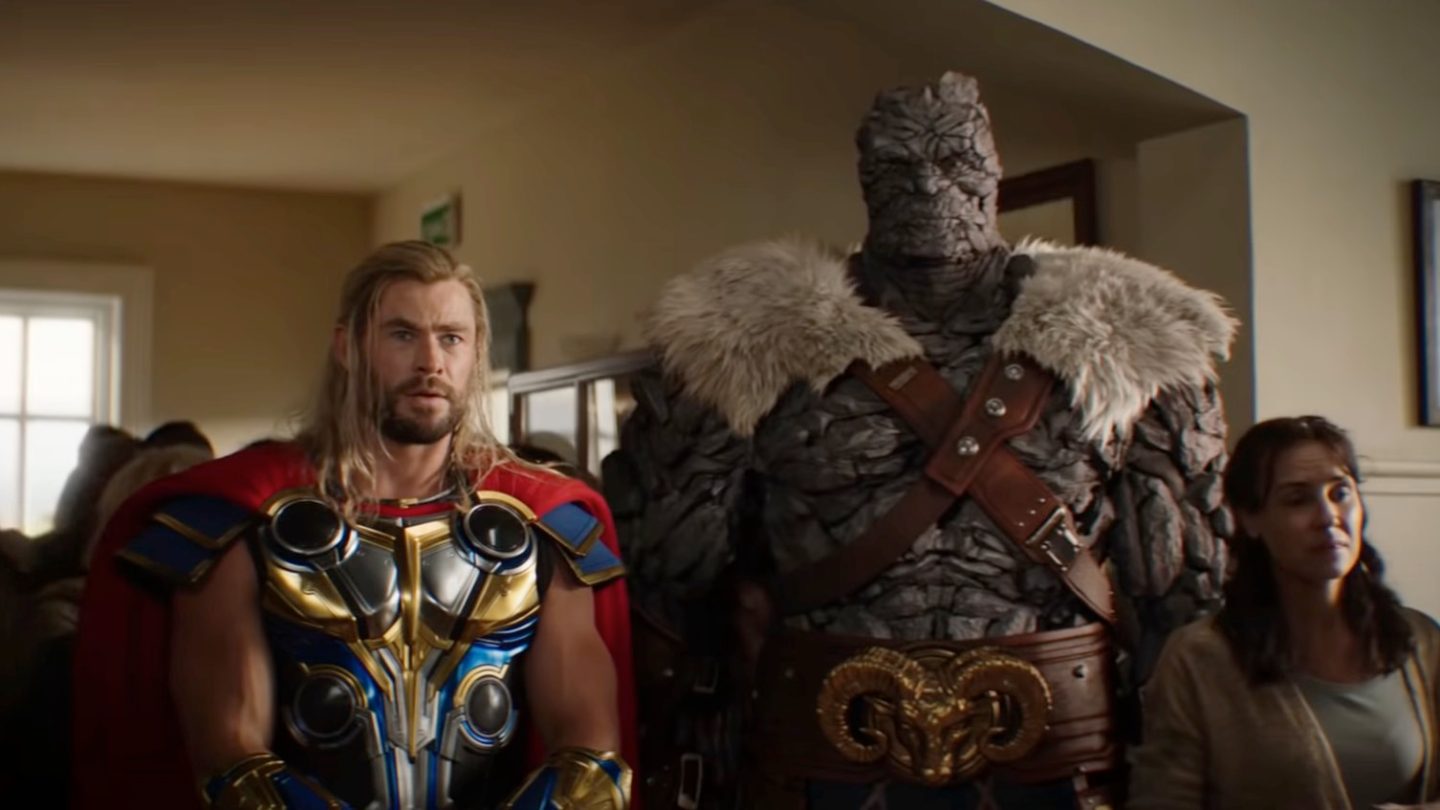 Marvel started the Thor: Love and Thunder marketing campaign much later than expected, delaying the first teaser trailer release for unexplained reasons. The good news for fans is that Marvel will only increase the frequency of promo footage releases. That’s why we have a second trailer out already. And Thor 4 trailer 2 has a bunch of exciting reveals in it that might make you miss the heartbreaking death teaser.

But we can’t explain any of it before reminding you that massive Love and Thunder spoilers might follow.

The second Thor 4 trailer delivers two big reveals about the film’s main characters. First of all, trailer 2 finally gives us Gorr the God Butcher (Christian Bale), and it’s a brilliant introduction. The first trailer did not feature the villain, although it contained a big Gorr teaser. Come to think of it, that was the first significant death in Thor 4 and a great Love and Thunder Easter egg.

Moreover, Thor 4 trailer 2 shows Mjolnir in action in Jane’s (Natalie Portman) hands. She becomes Mighty Thor in the movie, and the trailer tells us that Thor (Chris Hemsworth) isn’t the one who fixes the hammer. Also, the clip teases new powers that Mjolnir might have.

Is Zeus in Thor: Love and Thunder?

This brings us to the third big reveal in Thor 4 trailer 2. We finally get to see Zeus (Russell Crowe). We knew for a long while the actor would play this particular god in Taika Waititi’s new Thor movie. And the first teaser did feature Zeus, but Marvel never showed his face.

Trailer 2 shows how powerful Zeus is. It’s enough for him to flick his fingers too hard for Thor’s clothes to disappear, much to the audience’s delight. That’s actually a very important detail, even though it might seem an insignificant joke. And that’s what makes the Thor 4 death all the more interesting.

Zeus is one of the most powerful gods out there, if not the most powerful. He has Thor in chains for some reason, and we do know that Thor & Co. will fight against Zeus’s guards. That’s where Mjolnir’s new power might show up first.

Speaking of weapons, there’s one more thing that we have to mention, Zeus’s weapon. He has a golden thunderbolt, which probably holds great power.

The death teaser in Thor 4 trailer 2

This thunderbolt detail brings us to the death teaser in Thor 4 trailer 2. Zeus’s weapon is a source of death, no doubt. But, more importantly, it’s probably the kind of weapon Zeus will never be parted with. The only reason for anyone else to use his weapon is for Zeus to be dead.

We’re only speculating here, as the full Love and Thunder plot has not leaked. However, we do see Valkyrie (Tessa Thompson) using the thunderbolt in a fight against Gorr in Thor 4 trailer 2. Death seems the only reasonable explanation.

And if Zeus dies in Love and Thunder, then we expect Gorr to be the one who kills him. After all, he is the God Butcher. Gorr is on a personal quest to exterminate all gods. And Zeus must be at the top of that list.

No matter how disappointing it might be to have Crowe’s Zeus die on his first appearance in the MCU, such a death would serve a clear purpose. It will further emphasize the massive danger that Gorr is. If he can dispose of the god of gods like that, then Gorr could be capable of other despicable things in the universe. And Thor will absolutely have to stop him.

Again, we’re only speculating here. Marvel’s trailers can be misleading. And there might be other reasons why Valkyrie has Zeus’s thunderbolt in Thor 4 trailer 2. We’ll just have to wait for July 8th to see how everything plays out.