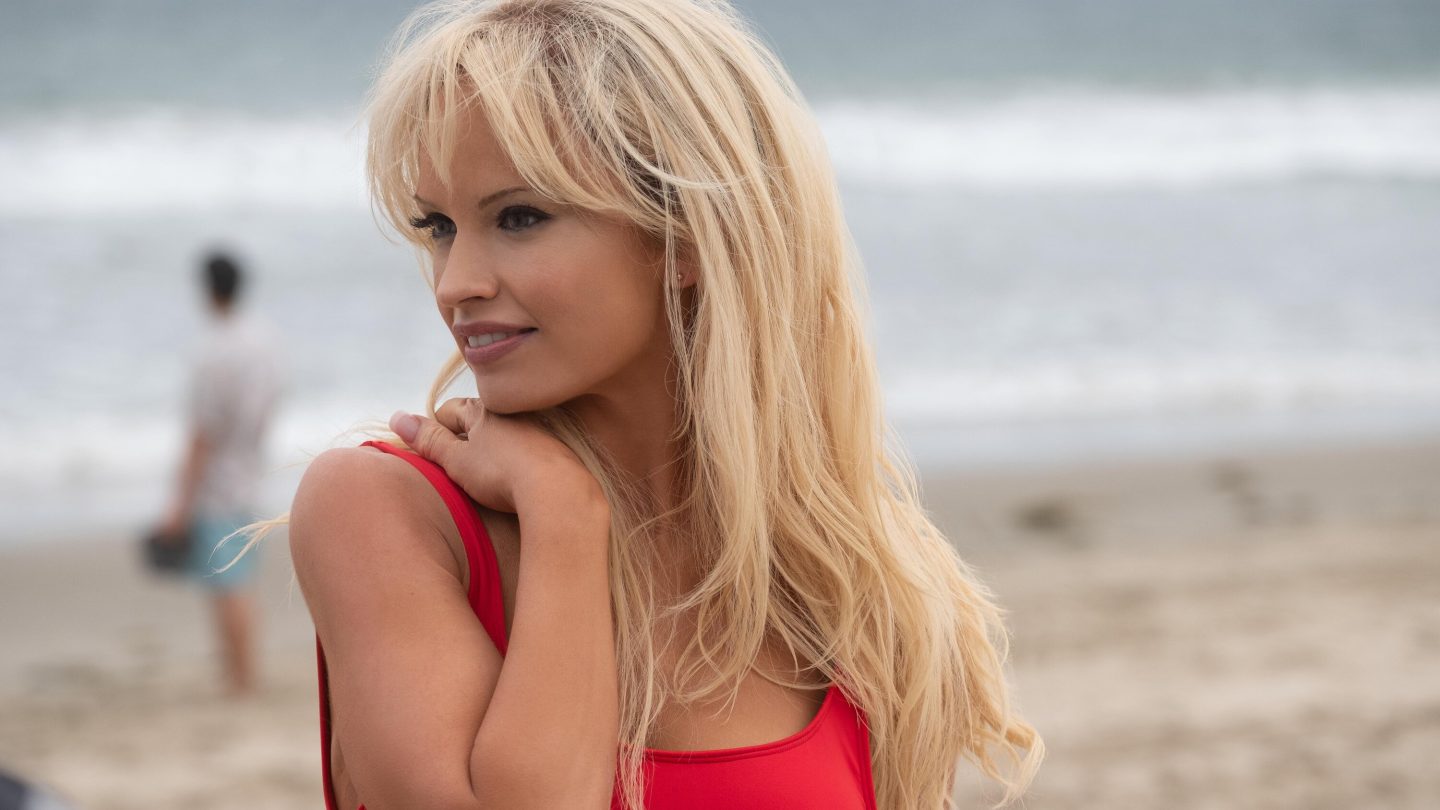 Episode one of the newly released Hulu limited series Pam & Tommy immediately transports us right back to the analog, decadent glory days of the 90s. This — as it should go without saying, because it’s right there in the title — is a story about an infamous celebrity couple. But it’s also about their leaked sex tape, the reality TV era, celebrity culture, fame, sex, and sexism. And for this first chapter of the story, titled “Drilling and Pounding,” we begin in a dimly lit room.

An episode of Jay Leno’s late-night show is playing on an old-school TV set — at a specific point of the episode, in which he’s shown making one crude bit of innuendo after another in that smarmy, nasal-y, high-pitched monotone of his. He’s cracking wise, to be exact, about the aforementioned leaked sex tape, the co-star of which is the blonde bombshell in the low-cut black dress sitting across from him, tendrils of her golden hair delicately framing her face. Only … wait, my bad.

That’s actually Lily James-as-Pam Anderson. But you really can’t really tell until the camera zooms in closer to the scene on the TV. Suffice it to say: This Hulu series went all-out on the visuals.

She and Sebastian Stan — who plays Anderson’s wild-eyed, tatted-up husband and Motley Crue drummer Tommy Lee in this 8-episode series — look uncannily like their real-life counterparts who got married four days after meeting each other.

That said, this buzzy new series, which debuted Wednesday to strong early reviews, is less concerned with appearance than with the events surrounding the wildest aspect of this pair’s utterly wild marriage. It’s clear, right away, where things are headed, when we meet a schubbly carpenter with a semi-mullet (played by Seth Rogen). He’s downstairs in Pam & Tommy’s Malibu mansion, drilling and pounding away as part of some work he’s been hired to do (ha! — you thought the title of this episode was a reference to something else).

Okay, fine. Rogen’s carpenter is doing all that work while — yes, some of the latter is audible upstairs above him. And all of it, against Fatboy Slim’s “Praise You” playing in the background.

Quick spoiler alert about this first episode: James, the dead ringer for Anderson, has maybe five or so minutes of screen time. And it quickly becomes apparent why.

“I was blind, now I can see — you made a believer out of me”

The fact that so much narrative attention is spent early on Rogen’s carpenter — who Tommy summarily fires after ranting about how much everything is costing — turns out to be an inspired choice.

The series doesn’t try to score cheap points to lure you in. We all know what this is about. How we get there is thanks to the down-on-his-luck loser played by Rogen, a self-professed student of religions who believes in karma and wets his pants when he’s scared. He decides to break back into the couple’s mansion post-firing. Angry about how he was treated, he somehow manages to wheel a safe off the property. Without getting caught.

And then … he opens the safe. He doesn’t realize what he has in his possession, not at first. But he can see that he’s struck the mother lode. He dumps out a stash of guns, cash, and expensive watches. Relishing the moment, while the soundtrack blares Primal Scream’s Movin’ on Up.

Sitting on the couch, smoking a cigarette, he seems to embody every sentiment in that Primal Scream track. Blind, but now he can see … movin’ on up. Things are right again. And then, as he relaxes on the couch, we see his ratty sock-covered foot bump up against it, on the floor.

“The greatest love story ever sold”

Its contents are initially unclear. Because the tape itself is an unmarked Hi8 video cassette.

And right as they have their oh my God moment, the credits roll.

This series is actually based on a 2014 Rolling Stone article about the whole saga. One that helps put this new show into its proper context — because it’s about a lot more than a sex tape. This series is really about the hyper-connected, voyeuristic world of the Very Online that we’ve all inherited, for better or worse. What the Pam & Tommy sex tape taught us, writer Amanda Chicago Lewis wrote for Rolling Stone, “is that an unassuming individual could acquire a piece of content, offer it up to the Internet and watch it ricochet around the planet.”