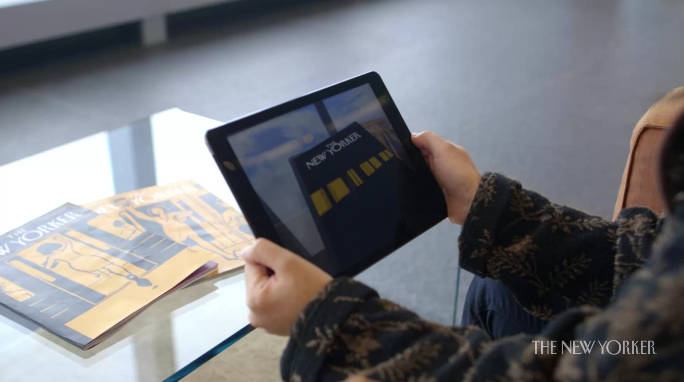 Some may say that print is dying, but that’s not exactly the case. It turns out that print magazines can still find new ways to be innovative in ways we never imagined possible. Don’t believe me? Then consider that The New Yorker’s latest cover comes to life when viewed through the lens of a tablet or smartphone.

The magazine’s annual Innovators Issue came out with an original cover that features augmented reality content. Created by artist Christoph Niemann, the “On the Go” cover shows what looks like a rather dull black and yellow image of a woman stepping through the doors of a subway car (see below).

But that quickly changes the second you look at the same cover using a smartphone or tablet and The New Yorker‘s Uncovr app (App Store and Google Play) – both the front and back side of the magazine become animated.

“The idea of an augmented or virtual reality is inherent in any drawing—it’s almost the definition of a drawing,” the artist said. “If you create a world on paper, you create a window. Usually, you just break the surface with your mind, but you always have the feeling of: What if you could step into that world or if something could come out of it?”

A three-dimensional city shows up on the smartphone or tablet — move the camera around, and the AR perspective changes accordingly.

“In a drawing, the barrier between the real world and the made-up world is the surface, so at the very beginning I thought of an elevator with its doors closing,” he said.

“But then I realized that the subway is even better because it really does take you to a different world. The closing doors are a flat surface that separates two worlds, and so are the covers of a magazine—separating before you read it and after you read it, what you know and don’t know, how your views change. So between the front and the back cover, and the experience created by the app, I like that we could show essentially two different angles on the same world. Like stepping through a mirror.”

You can view the 3D cover in a video at the source link.