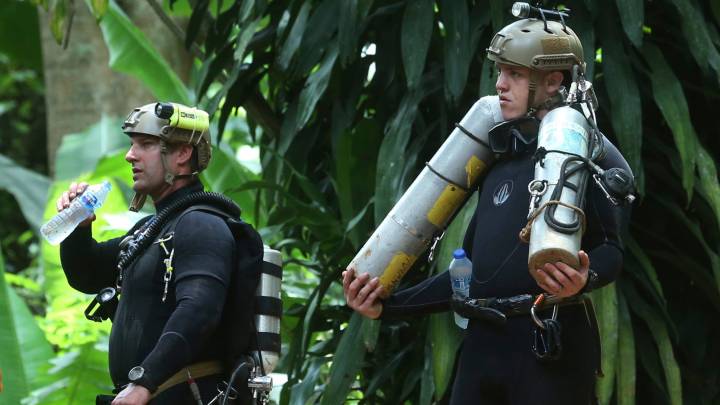 Remember those soccer boys who spent more than two weeks in a Thai cave after water from heavy rain blocked their exit? We’ve got good news for you. First of all, four of the boys were successfully extracted from the cave system. Secondly, after a delay of several hours required them to replace the oxygen tanks along the path, the teams of divers are going back in, to bring more of them to the surface.

Finally, Elon Musk tasked SpaceX engineers with crafting a special tiny submarine that could be used during the rescue, and the tech guru says the device is operational. That said, Musk’s effort, while laudable, might not be needed for this particular rescue. None of those kids will have to spend any time inside the tiny submarine, but it could be developed further for similar rescue missions in the future.

Eight more boys and their coach need to be removed from the cave, and the rescue has resumed, CNN reports.

Chiang Rai governor Narongsak Osotthanakorn said at a press conference on Monday that the effort would involve the same divers. Sunday’s mission took nine hours and plenty of energy, with each child being accompanied by two divers along the way. The rescue went faster than in practice deals, the governor said. Previously, round trips through the cave network would take about 11 hours.

As a reminder, the tunnels measures around 4km (2.5 miles) with several areas being underwater thanks to the rains in the region. The visibility is poor, and some spaces are very narrow. Moreover, not all the boys know how to swim, let alone dive underwater. And while oxygen is placed along the road, one experienced ex-Thai Navy SEAL diver lost his life last week while replacing the oxygen canisters.

After rescuing the four boys, the officials paused the operation for at least 10 hours to fill the oxygen tanks that were used.

The first kilometer is the hardest, CNN explains, as that’s where the children have to navigate a narrow flooded channel.

During this process, rescuers need to hold the boys’ oxygen tanks in front of them and swim pencil-like through submerged holes. Having completed this section, the boys are then handed over to separate, specialist rescue teams, who help assist them through the remainder of the cave, much of which they can wade through.

The rescuers are racing against time, as more rain is forecast, and the extra water would significantly complicate matters. The Thai authorities have been pumping out water from the cave system ever since locating the missing soccer team, but that wasn’t enough to remove all the water.

The rescued kids are now in the hospital, where they should receive the proper care before being released to their families.

He posted a video showing how the submarine was tested.

The kid submarine is extremely small and designed to be navigated through tight spaces:

However, the experience can’t be comfortable, and I don’t even want to begin to imagine what it must be like for the person inside that narrow space, especially being a kid who’s been trapped in that mountain for more than two weeks.

The submarine is meant to be used only in that section where children would have to go underwater. Experienced divers, meanwhile, would navigate it.