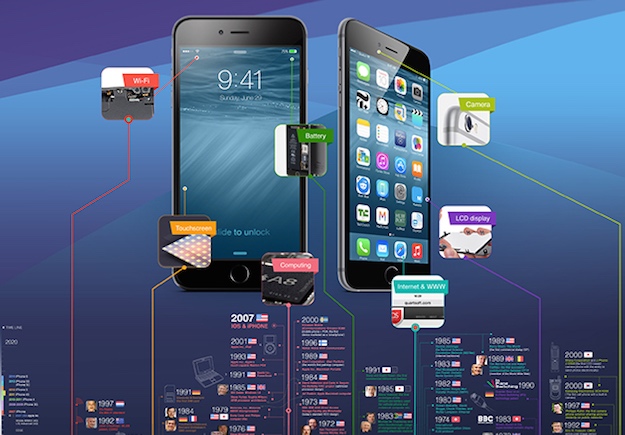 This week marks the 9th anniversary of the iPhone, the game-changing device that quite literally changed the way hundreds of millions of people around the world live. So while we’re busy praising the iPhone and the smartphone revolution that it helped usher in, we thought now was as good a time as any to talk about the myriad of technical and scientific advancements throughout history that helped make the iPhone a feasible product.

To this point, Quartsoft has a fascinating and incredibly detailed infographic, which while too large to post in its entirety here, does an incredible job of highlighting the entire history of every piece of technology that makes the iPhone the marvel that it is, tracing developments from ancient times all the way to the present.

Whether it be David Edward Hughes who in 1880 was responsible for the “first intentional transmission of a signal by means of electromagnetic waves” or Germany’s Georg Ohm who came up with the concept of electric resistance in 1827, the infographic provides a fascinating history lesson which cleverly showcases how technological innovations were slowly but surely built on groundbreaking scientific advancements throughout history.

If you don’t have the time or a big enough desktop monitor to quickly peruse through the infographic, not to worry. Quartsoft also has a text-based timeline on its homepage which chronologically lists all of the important scientific developments across the following categories: electricity, battery technology, Internet, computing, radio breakthroughs, telephone advancements, Wi-Fi, photography, LCD displays, video cameras, and touch screen technology.

Make sure to hit the source for the full graphic.