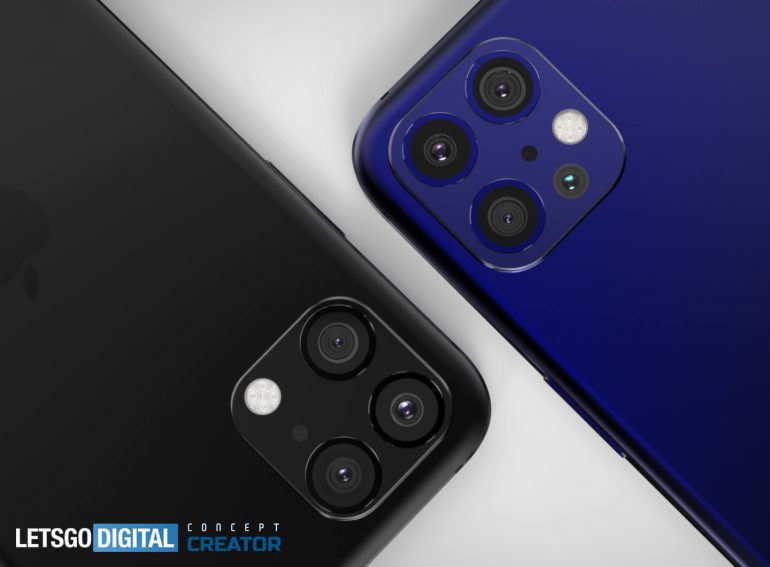 This year is set to be a major one for the iPhone, with the new iPhone 12 series poised to include 5G support, four phones in three display sizes, and at least some of the models boasting the biggest redesign the phone has seen over the last few generations. Among the tidbits that have leaked out, the iPhone 12, iPhone 12 Pro, and the iPhone 12 Pro Max will feature a new rear camera setup though they’ll still have a notch plus flat steel all around the edges. The lineup will also include 5G support and come in 5.4-inch, 6.1-inch, and 6.7-inch variants that also feature OLED screens and 2mm bezels.

Along these lines, new iPhone 12 concept renderings have just been published that provide a better look at what we’re likely to see once Apple officially unveils the new iPhone series later this year. The renderings below combine publicly released leaks and rumors that have come out so far to result in these images, produced via a partnership between Dutch tech news blog LetsGoDigital and designer Jermaine Smit, aka Concept Creator.

Among the details reflected in these renderings, the smallest of the new iPhone 12 models is a 5.4-inch version with an OLED display and which also sports a dual-camera setup on the back. Also shown is a 6.1-inch OLED model with a dual camera, as well as a 6.7-inch version with an OLED screen and a triple camera setup with a 3D Time-of-Flight camera.

Thanks to the world’s top Apple insider, analyst Ming-Chi Kuo of TF International Securities, we already knew the iPhone 12 series would bear shades of the iPhone 4’s industrial design. Among the changes, the phones will have metal frame edges, with an emphasis on thinness apparently also reflected in the coming designs. For example, the Dutch outlet notes, the iPhone 12 Pro Max will only be 7.4mm thick — almost 10% thinner than the iPhone 11 Pro Max. Sensors for both Face ID and the TrueDepth camera will also both still be housed within the phones’ notch.

In terms of camera features and changes, the handset at the bottom end of the iPhone 12 lineup will reportedly feature two cameras on the back, presumably a wide-angle and an ultra-wide-angle lens. Both Pro models should come with an additional third lens, likely a telephoto lens. Meantime, elements of the camera from the iPhone 11 series like Deep Fusion will most likely remain present here — Deep Fusion referring to the ability to take better photos when lighting conditions are poor.

Apple is also pressing deeper into augmented reality, with no less than CEO Tim Cook saying recently that he believes AR is the “next big thing.” Look for new AR-related features here to be announced, as well.

It will also be very interesting to get a look at the first benchmark results from testing the new A14 Bionic chip that should make these new phones pretty darn fast and more powerful. An especially valuable development, considering the advancements that will come with iOS 14 which Apple will no doubt unveil during its June developer conference.

Apple reports its fiscal first-quarter earnings on Tuesday, and as always the iPhone will take center stage in both the presentation of the financial results as well as in the outlook from executives (in addition to the question-and-answer portion from analysts). As the renderings above show, details about the company’s newest iPhone models are already trickling out months in advance, though investors will no doubt also want to get a read on how well iPhone 11 sales held up during the just-ended, all-important holiday buying season. Phone sales that, of course, fuel the complementary sales of everything from AirPods to services like + which the company is increasingly trying to build support for.