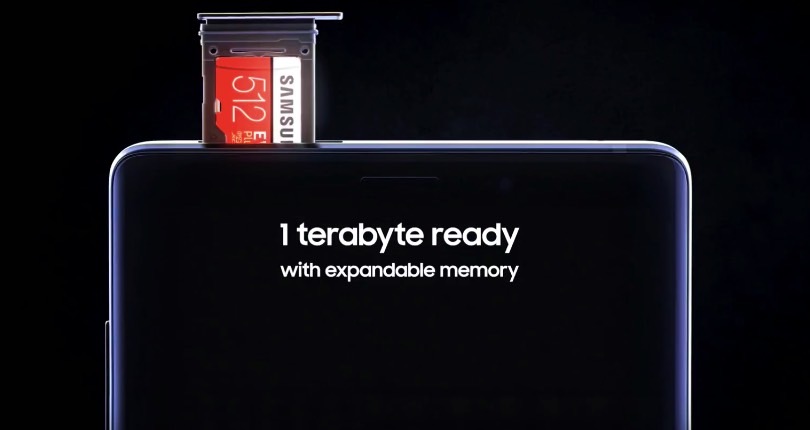 With just six days to go until the Galaxy Note 9 will be unveiled in New York City during Samsung’s second Unpacked press conference of the year, Samsung posted the promo video for the Galaxy Note 9 on its YouTube channel. It’s not that big of a deal, since we already knew everything there is to know about the phone. But Samsung’s video practically confirms that the Note 9 will be Samsung’s first phone to support 1TB of flash memory, and that actually is a pretty big deal. Will it help the Note 9 avoid suffering the same fate as the Galaxy S9 and Galaxy S9+? That remains to be seen.

Storage is important for Samsung, and the Note 9 will have 512GB of built-in memory as well as support for 512GB microSD cards. That’s the only way to get 1TB of data on a phone right now. And that means Samsung will also unveil its first ever 512GB microSD card during the event.

The Galaxy Note 9 won’t be the first phone in the world to pack 512GB of local storage, but it’ll indeed be more affordable than some of the alternatives.

Samsung’s video also teases various other features for the Note 9, including the brand new S Pen stylus, all-day battery life, and the fact that the Note 9 is “super powerful.”

The design of the phone is also clearly visible, and the blue and yellow combination reminds us of a leaked poster from a few weeks ago. It sure looks like Samsung will pair colorful S Pens with some of its Note 9 versions, which isn’t a bad idea.

Check out the full video below, while you wait for Samsung to open up preorders for the handset.