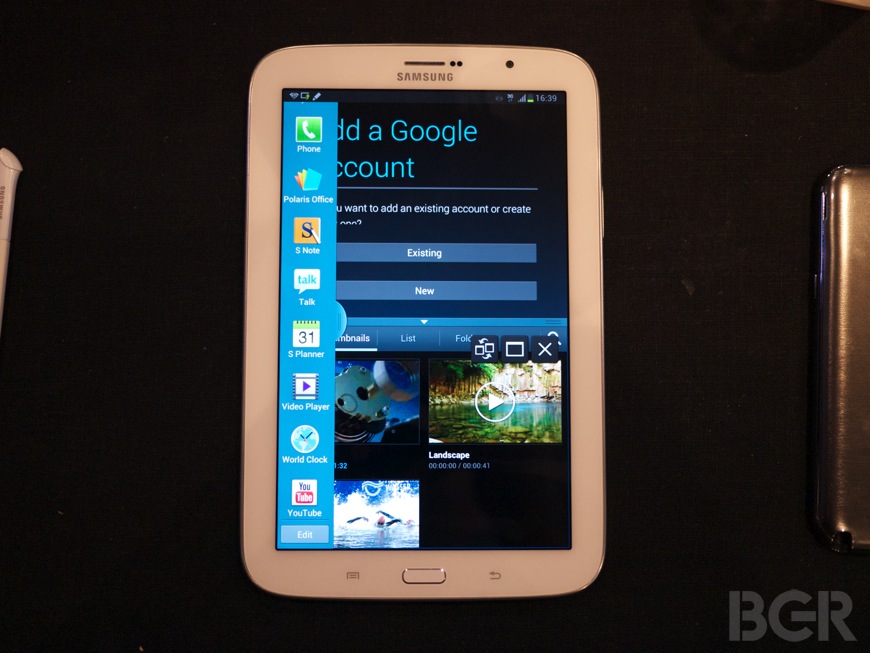 Samsung’s (005930) Galaxy Note 8.0 tablet has been one of the worst-kept secrets in recent memory, as rumors and leaks floating around the Web over the past few weeks have painted a fairly comprehensive picture of Samsung’s latest Note. But the Galaxy Note 8.0 is now finally official, and we met with Samsung on Saturday to take a look at its new slate ahead of the Mobile World Congress trade show, which kicks off on Monday.

We were presented with the global version of the Galaxy Note 8.0, an important distinction for the following reason: while American users might not be treated to the same “luxury,” this global handset is, in fact, a phone. As ridiculous as it sounds, this 8-inch device can, in theory at least, be held up to your ear and be used to place calls. Whether or not you’d want to do such a thing is up to you, but Samsung seems to think that users deserve the option.

The Galaxy Note 8.0 is quite well designed. At 338 grams, its weight feels just right, with enough heft to give a premium feel but it’s not too heavy so as to make one-handed use fatiguing.

Samsung claims that it used the standard Moleskine notebook as a cue when designing the Note 8.0, and while commenting on that particular fact might place Samsung in the line of fire for yet another series of lawsuits, we can say that the dimensions of the Galaxy Note 8.0 seem ideal. It’s easy to handle with one hand, but large enough to provide enough screen real estate for content consumption. It’s a great balance.

Specs include a 1.6ghz quad-core Exynos processor, 2GB of RAM, a massive 4,600 mAh battery, GPS, Bluetooth 4.0 and a, 8-inch HD screen that packs a relatively unimpressive (by today’s Retina standards, at least) 189 pixels per inch. Performance was impressive, but one thing to note is that the 5-megapixel rear camera is next to useless. Then again, using the Note 8.0 as a camera is about as comfortable as attempting to make a phone call on it.

Aside from the usual suite of on-board Samsung apps, the Note 8.0 features a “Premium Suite” of apps designed to make use of the S Pen stylus. Building on the success of the Wacom-designed input device that has made the Note line so distinct, the new Note allows third-party developers to utilize its hover-gestures to build new features into their software. As a proof of concept, the Galaxy Note 8.0 will launch with a new version of Flipboard that features an expanding tile option initiated by hovering the pen over a content tile.

Other features unique to the Note 8.0 include an enhanced “Readers Mode” that automatically adjusts screen settings to optimize the device for reading eBooks, a new remote program designed to replace your universal TV remote, and an enhanced multi-window mode that really shines on the 8-inch screen.

The new 3G-enabled Galaxy Note 8.0 launches worldwide in the second quarter this year and a Wi-Fi version will follow closely behind.