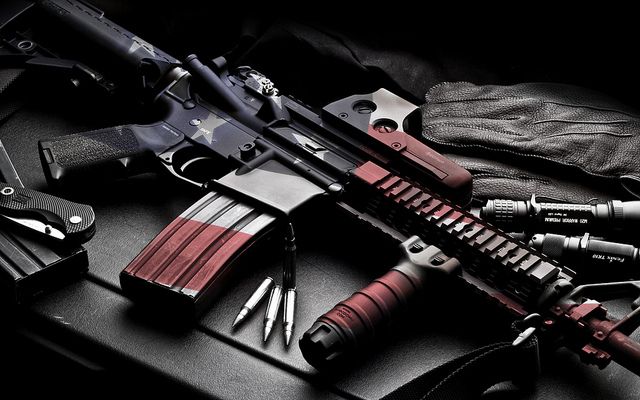 Someone just tried to assassinate presumptive Republican nominee Donald Trump, and they didn’t even bring their own gun to the fight, choosing to try to steal an officer’s gun at a rally. The incident took place days after a person decided to bring a gun to a nightclub, killing 49 people in Orlando, with the help of a rifle that was originally developed for special ops. These sort of unfortunate events spark new debates around gun control. One idea is to ban rifles designated as weapons of war, and a new report shows us what happens when 5.56mm AR-15 rifle bullets tear through flesh and bone.

“One looks like a grenade went off in there,” University of Arizona trauma surgeon Peter Rhee told Wired when comparing the damage done by AR-15 bullets and 9mm handgun bullets. “The other looks like a bad knife cut.”

The reason that happens is pretty simple, and it’s explained by physics. The bullet from an AR-15 rifle leaves the muzzle at three times the speed of a handgun bullet. That means it has plenty of energy to “distribute” inside the body upon collision.

It can disintegrate three inches of leg bone, turning it to “dust” according to Donald Jenkins, a trauma surgeon at the University of Texas Health Science Center. “The liver looks like a jello mold that’s been dropped on the floor,” if hit by the same bullet, Jenkins says. The exit would can be the size of an orange.

Comparatively, handgun bullets can be stopped by flesh and bone, and can pass through the body only to remain stuck in the skin.

Furthermore, AR-15 bullets don’t just affect the skin and the tissue immediately under it. In addition to turning a bone to dust or liver into jello, the high energy would also cause damage around the entry and exit wounds.

When a high-velocity bullet pierces the body, human tissue can ripple just like water does when you throw an object in it. But it all happens at increased velocity. The bullet and its ensuing fragments might miss a critical artery, but the cavitation effect could tear through blood vessels.

Rhee also said that a handgun would require only one surgery, but an AR-15 bullet wound needs three to ten.

Because it’s designed so well, the AR-15 fires almost without recoil, meaning that a shooter can inflict more damage with multiple bullets accurately hitting the same target. “The gun barely moves. You can sit there boom boom boom and reel off shots as fast as you can move your finger,” Denver Health trauma surgeon and Journal of Trauma and Acute Surgery editor Ernest Moore told Wired.

A video from the Smithsonian Channel shows the devastating effects of assault rifle fire on the human body: