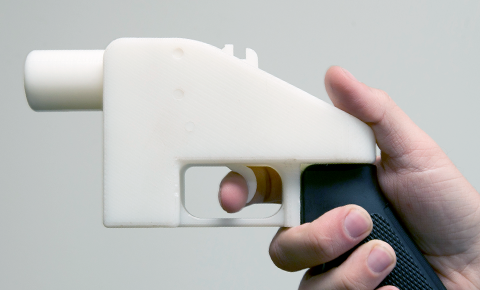 Cody Wilson, founder of Texas-based nonprofit Defense Distributed, once wrote in an email to TechCrunch that the era of downloadable guns is upon us — indeed, that guns should be “as downloadable as music. There will be streaming services for semi-automatics.”

That day is arguably upon us, thanks to a settlement between his nonprofit and the State Department in June which will let Defense Distributed put the blueprints online starting Aug. 1 for 3D-printed guns — including firearms like the AR-15, which has been used repeatedly in mass shootings across the U.S.

The Second Amendment Foundation, which worked with Wilson to help achieve this settlement, has released a statement calling this “a devastating blow to the gun prohibition lobby.”

“The plans freely available next month put firearms clicks away from anyone with the right machine and materials,” CNBC reports. “That reality has startled gun control advocates, who say it makes untraceable firearms all the more available.

“For Wilson, August marks the end of a years-long legal battle: He designed a 3D-printable plastic pistol, the ‘Liberator .380,’ in 2012 and put the plans online. It was downloaded more than 100,000 times before federal officials blocked his site, citing international export law.”

Wilson filed a lawsuit and reached the settlement with the State Dept. last month.

Defense Distributed’s website previews the plans for the Liberator pistol, as well as an AR-15 and a Czechoslovakian assault rifle, the VZ-58. Worth noting — the settlement also doesn’t mean it will be so easy that just anyone can start printing these and other weapons.

CNBC’s reporting goes on to note that the printers needed to produce these guns can cost from $5,000 up to $600,000. And you have to have the right materials, since the report also mentions an early design shattering after just one shot was fired.

David Chipman, a veteran of the Bureau of Alcohol, Tobacco, Firearms and Explosives, has told Vice News that the homemade guns are popular with criminals. They use such “ghost guns,” as he called them, to get around assault weapon regulations.

Cody, of course, sees this as a landmark win for the Second Amendment. He said as much in an interview with the right-wing news site The Daily Wire, in which he raved: “I barely put a million bucks into this and I got you the Second Amendment forever. What has the NRA done for you lately?”