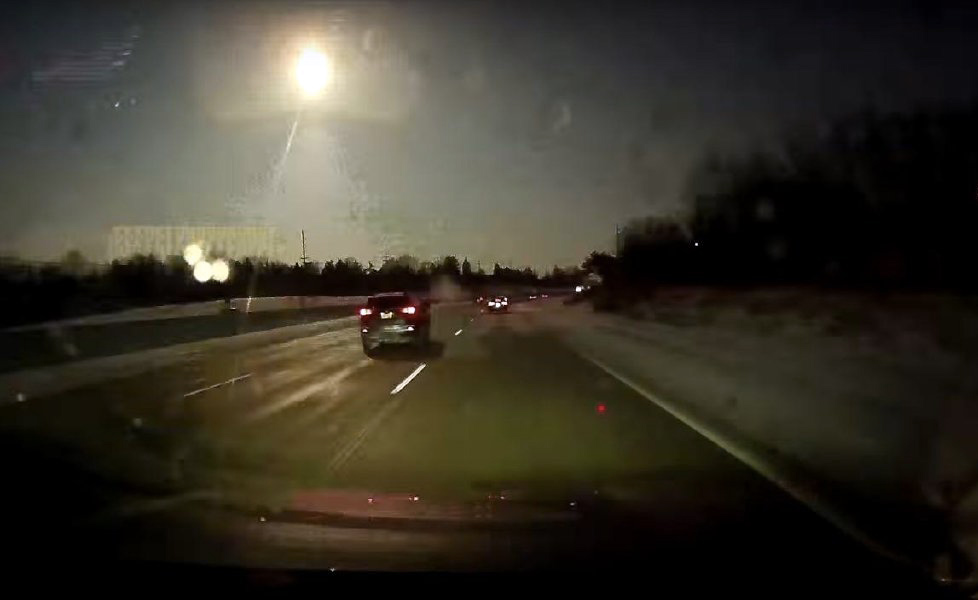 A meteorite entering Earth’s atmosphere lit up the night sky above Detroit metro area in Michigan on Tuesday night. NASA officials have confirmed the event, which was caught on camera by NASA’s meteor camera at 8:08 PM local time at Oberlin College in Ohio. While NASA’s footage shows a far-off streak of light, amateur video captured by people and security cameras around Michigan give us a much better look at the meteorite as it comes crashing down to Earth.

Residents across Southeastern Michigan report seeing a fireball streak through the sky before hearing a loud “boom.” Those close enough were even able to feel the impact as the space rock struck down about 5 miles west of New Haven, Michigan. According to the US Geological Survey, the impact was so severe that it registered as a 2.0 earthquake, NPR reports.

NASA scientists believe the meteorite measured between one and two yards across, and they estimate the space rock’s weight at more than one metric ton. The meteorite is believed to have traveled between 40,000 and 50,000 miles before it made impact in Michigan on Tuesday evening.

Bill Cooke, an Alabama-based scientist with NASA’s meteoroid environment office, told The Detroit News that while events like these are common in some regions, occurring as often as a few times each month in some regions, they’re quite rare in metro Detroit. When meteorite strikes do occur, he explained, it’s quite a sight to behold.

“When they hit the atmosphere, they create these very bright fireballs,” Cooke told the paper.

Videos and photos of the meteorite streaking through the night sky over Michigan have flooded social media, though some offer a better view than others. We have chosen a few of the better videos out there, and you can see them all embedded in the post below.

Here’s a view of the meteor as seen by NASA’s meteor camera in Ohio:

Here’s a view from a traffic camera in Detroit, Michigan:

Instagram user @topherlaine captured the event with a security camera at his home:

And finally, YouTube user Mike Austin caught what is perhaps the best footage of the meteor over Michigan on his dash camera: