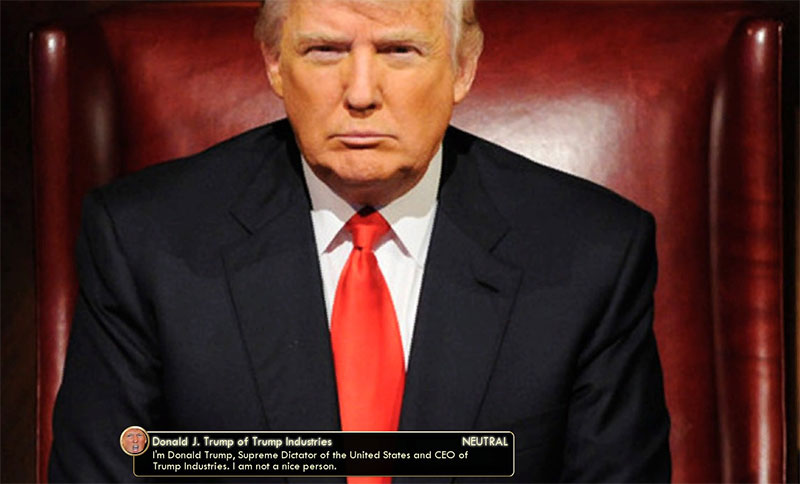 There’s an increasing (and terrifying) likelihood that doughy billionaire Donald Trump could actually become our next president. To get a preview of the horrors that await us, some person has created a mod for the game Civilization V in which we can play a version of America that’s headed by President Trump. The results are both hilarious and depressing.

MUST READ: The ‘Game of Thrones’ theory that’s burning up the Internet

As you’d expect, playing as Trump involves being brutally cruel to your enemies at the expense of things like international alliances and trade. From an AI perspective, I imagine that playing against Trump is a little bit like playing against a Brooklynite version of Genghis Kahn who hurls racial epithets at “low-energy” leaders like Gandhi and Ramses II, and who refers to Catherine the Great as “a real bimbo.”

And of course, Trump’s version of America comes with all sorts of hilarious perks such as the ability to build a big, bee-yoo-tee-ful wall along the border. There’s no indication, however, that you’ll be able to make the Aztecs pay for it:

You should also note that hitting a Golden Age while playing as Trump might be a bad thing since it will increase your civilization’s unhappiness by 100% and all but guarantee people in your civ will rebel and turn into barbarians that will attack your cities.

In other words, this sounds like a frighteningly realistic simulation.

You can check out the full mod for yourself at this link.