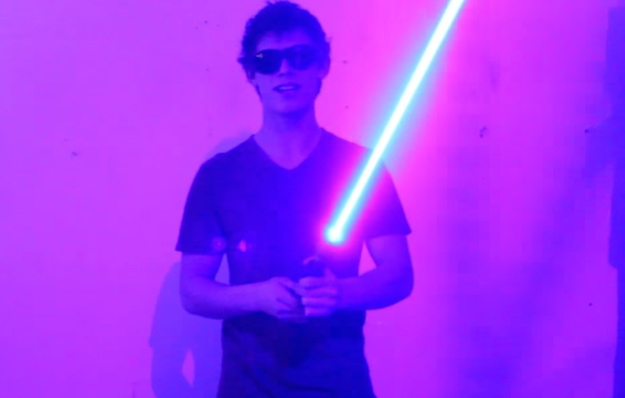 With Star Wars hysteria still in full swing, it was only a matter of time before famed do-it-yourselfer and all-around laser buff Styropyro came out with a ridiculous video showing off his own homemade lightsaber. While we previously highlighted a working lightsaber put together by electrical engineer Allen Pan, Styropyro’s effort is a lot more accurate, which is to say it’s frighteningly more dangerous.

“This laser is several times over the limit at which a direct hit to the eyes would blind you instantly and forever,” Styropyro says early on, “so that’s why I wear these safety goggles.” Touche Styropyro, touche.

This contraption definitely falls under the “Kids, don’t try this at home” category. As you can tell from the video below, the power of his makeshift lightsaber is very real and comes from a souped up 7W blue laser. In the video, we see the condensed beams of light quickly cut through electrical tape, burn a cup, and even engraving wood.

“In terms of building a working lightsaber, the two main limiting factors are beam confinement and high energy density storage. With the amazing Li-Ion batteries that the scientists/engineers have developed, stupidly powerful handheld lasers can be built, just like this one here. The issue then becomes confinement, which doesn’t look possible any time soon with a device like this. Oh well, my attempt is still bright and light things on fire!!

My device uses a Nichia GaN laser diode, which was overdriven to 7W of output by running it at 4.6A with a couple high efficiency buck drivers in parallel. An anti-reflective coated glass lens focuses the beam, and the whole device is powered by two unprotected 18650 batteries in series.”

And as if that weren’t crazy enough, Styropyro teases us with news that he’s planning on developing a laser bazooka sometime in the near future.