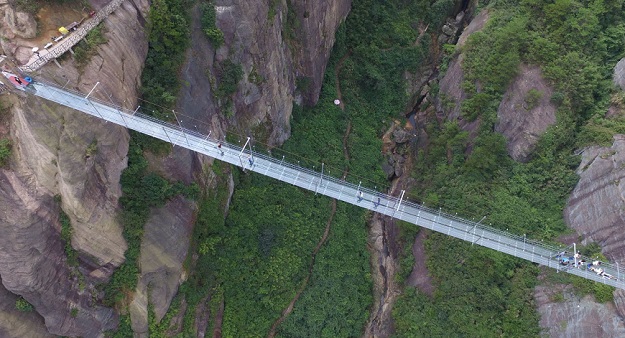 As we informed you earlier this month, the new trend among tourist destinations in China is to build long glass walkways that are elevated hundreds and sometimes thousands of feet up in the air. While this may sound insane, officials have insisted that this glass is exceptionally safe: It’s three-quarters of an inch thick and has been treated to resist to both bending and shattering. However, it looks like one glass bridge suspended 3,500 feet in the air at the Yuntai Mountain Geological Park has already experienced its first terrifying cracks.

FROM EARLIER: Why is Burger King’s scary black whopper causing an outbreak of green poop?

Mashable spotted some posts on Chinese social media website Weibo this week that claimed a glass walkway at Yuntai Mountain started to crack while they were walking across it.

“I was almost at the end and suddenly I heard a sound,” wrote one Weibo user. “My foot shook a little. I looked down and I saw that there was a crack in the floor.”

According to a report in China’s People’s Daily Online, the cracks were caused when a tourist dropped a stainless steel mug onto the walkway. The park claims that the tourists were never in any danger from the cracked glass but… well, we still don’t find this reassuring since all it took was the drop of one mug to cause the glass to crack. Not to mention that this bridge has only been open for less than a month — what will happen to its structural integrity after several more months of both weather and human foot traffic wear it down further?