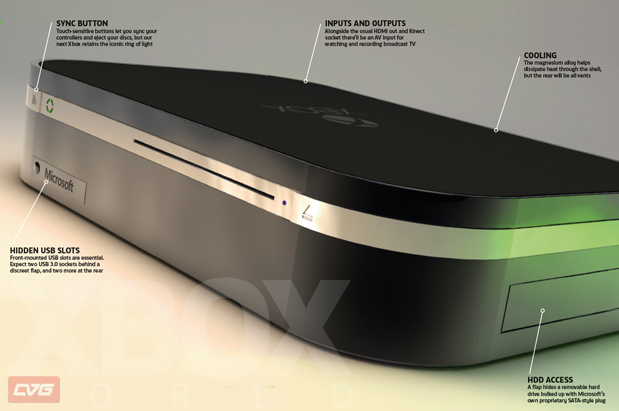 Now that Nintendo’s (NTDOY) Wii U is available in North America, all eyes are turned to Microsoft (MSFT) to announce its Xbox 360 successor (code-named “Durango”) and to Sony (SNE) to reveal its PlayStation 4 (code-named “Orbis”). The two consoles are expected to launch in time for the holidays in 2013, but it’s also possible the next-generation Xbox could be delayed until 2014 due to chip production issues. According to CVG, the Xbox World magazine’s penultimate issue has eight pages worth of juicy “Durango” details. Rumored next-gen Xbox bits include a Blu-ray disc drive, Kinect 2.0, directional audio, TV output and input, an “innovative controller” and support for augmented reality glasses – details that corroborate those from a leaked document in June.

Xbox World claims Durango developer kits have a quad-core CPU and 8GB of RAM. Based on the rumored specs and chatter from industry sources, Xbox World constructed renders of what it believes the plainly named “Xbox” coming next year will look like.

As shown in the renders, there’s a pair of USB drives up front hidden in a flap port and two more on the back, a sync button, proprietary hard drive slot, HDMI and Kinect ports, and AV inputs all within a magnesium alloy shell that will reportedly use the same patented “VaporMg” process used for Microsoft’s Surface tablet.

Despite topping the sales charts every month, the Xbox 360 and PlayStation 3 are now both tied with 70 million units sold worldwide. Even with big titles such as Halo 4 and Call of Duty: Black Ops 2, the Xbox 360 is starting to show its age now that it’s seven-years-old. Gamers are demanding new next-gen consoles that will push the envelope of graphics and A.I. again.