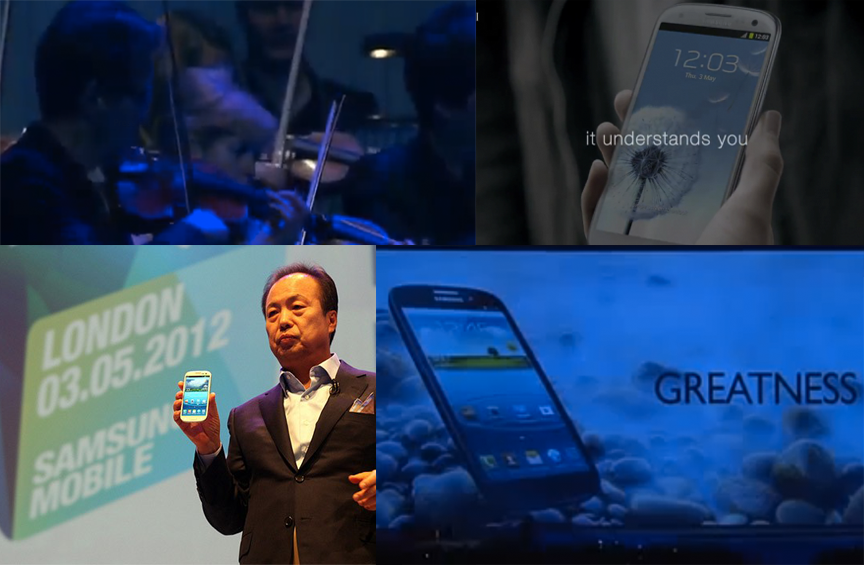 One of the most fascinating things about Samsung’s (005930) product launches is how remarkably they contrast with its television marketing campaigns. Samsung’s TV ads, as I’m sure you’ve seen by now, like to portray the company as a scrappy, funny underdog trying to make a name for himself while fighting the humorless, tired old behemoth known as Apple (AAPL). Samsung on television is all about zombie unicorn games, sharing sex videos and making fun of iPhone fans. In other words, it’s clever, irreverent and guaranteed to make you smile.

The Samsung we see at press events is another animal entirely. Instead of the witty quips and amusing sight gags, we’re treated to an epic, Wagnerian spectacle that is so over-the-top and operatic that you don’t think it will end until a woman in a viking helmet rapturously self-immolates while receiving a playlist over NFC.

Take last year’s Galaxy S III launch, for instance. Samsung paid the London Metropolitan Orchestra to play swelling string music just about every time Samsung executives said the word “megapixel,” all while massaging the audience’s senses with images of dandelions swaying in the breeze, bubbling brooks in shaded glens and closeups of the human eye pulsing with wonder.

And then there were the things that Samsung executives actually said about the Galaxy S III. Yes, it’s common for tech companies to hyperbolically refer to their products as “magical” and such, but Samsung really took it to another level. Among the highlight’s from last year’s gala:

In some ways, it’s easy to understand why Samsung went to such absurd lengths to create a bombastic production. After all, at the time it was still an up-and-comer in the Android phone arena and it wanted to set itself apart from the pack by commanding our attention. The question is, now that Samsung has firmly established itself as the Android ecosystem’s major powerhouse, will it still break out the big fireworks or will it adopt the more restrained, down-to-earth approach that has served it so well in its television campaigns?

Speaking personally, I hope that Samsung introduces the Galaxy S IV by having four men in loin cloths carry it to the center of the stage on a large ivory throne while the opening chords of Orff’s “O Fortuna!” crash thunderously in the background. Because even though I find Samsung’s product launches ridiculous, my life would feel a little emptier if they ever decided to tone them down.