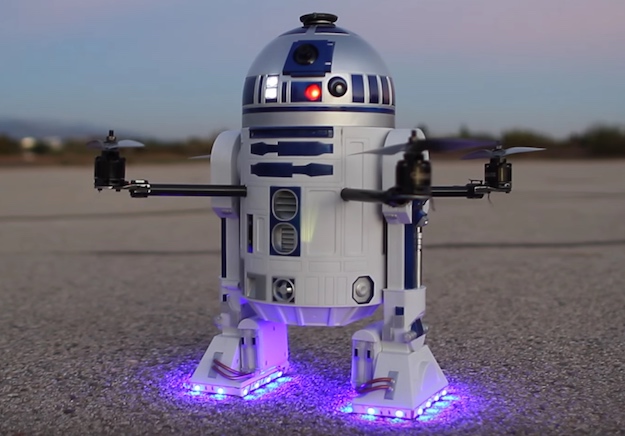 Over the past few months, we’ve seen any number of different drones take to the sky. From a 3D printed drone that can hit a top speed of 150 MPH to a drone with an attached flamethrower roasting a turkey, the vast array of drones people are coming up with these days is nothing short of astounding.

But just when we thought we’d seen it all, we stumbled across this: the world’s first R2-D2 drone. Of course, with Star Wars: The Force Awakens debuting in theaters in just a few days, the timing couldn’t be more appropriate. Fixed with four propellers, this R2-D2 drone looks just like the movie robot character it’s based on and is impressively quick.

The drone itself was put together by aerial cinematographer Don Melara and the aerial photography company Air Cam Shots. With no detail left untouched, the R2-D2 drone features a moving head, LED jetpack lights and a speaker that can emit whistles and beeps.  Not surprisingly, this bad boy reportedly stole the show at last week’s International Drone Expo in Los Angeles. For those wondering, the impressive contraption was built around the frame of a DJI drone.

Say hello to “Arturo”, the worlds first actual flying R2D2 drone. Custom build by Don Melara (By a fan for the fans). Complete with DJI GPS autopilot navigation system, Articulating dome, LED jetpack lights, Speaker box for sounds and even a ccd camera installed into his eye. It took approximately 8 days to complete the build. It was always a childhood dream of mine that someday, someone would build a flying version of our favorite StarWars Droid. Now, thanks to todays technology and a little bit of a passion for aviation it has become a reality.

A more dramatic video of Arturo in action, complete with rousing music and dialogue from Star Wars films, can be seen below.

Exceedingly cool. We can only hope that Lucasfilm doesn’t hit Melara with some soft of intellectual property suit. But who are we kidding, that doesn’t sound like something Lucasfilm would ever do, right?