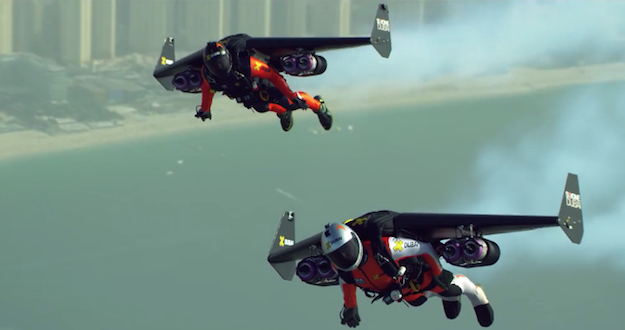 In an age where everything is recorded and put on the web, it’s not too often that one comes across a video that’s absolutely mesmerizing. But such is the case with this gem of a video featuring aviation enthusiasts Yves Rossy and Vince Reffet soaring through the Dubai skyline with jetpacks.

Even better, you can watch the jaw-dropping video in full 4K if you have the bandwidth to spare. If you’re not familiar with Rossy, he’s a former Swiss fighter pilot who, a few years back, went to work on developing his own jetpack, and quite successfully at that. While it’s unclear how fast Rossy and his protegé Reffet are flying through the air here, previous flights by Rossy saw him reach top speeds in excess of 170 miles per hour.

DON’T MISS: Did your favorite show get the ax? A complete list of TV show cancellations

So without further ado, enjoy this unmitigated greatness. One quick note: the first few minutes of the video showcase our two makeshift rocketmen flying over the desert and talking about their love of flight. It’s interesting, but things really pick up at around the 6 minute 30 second mark. The footage is so stunning that it almost looks like it was directly lifted from a video game like Grand Theft Auto V.

As for the jetpack itself, a 2013 Wired profile on Rossy relays that it has a 6.5 foot wingspan, weighs in at 121 pounds when fully fueled, and comes equipped with “four engines [that] produce roughly 50 pounds of thrust each.”