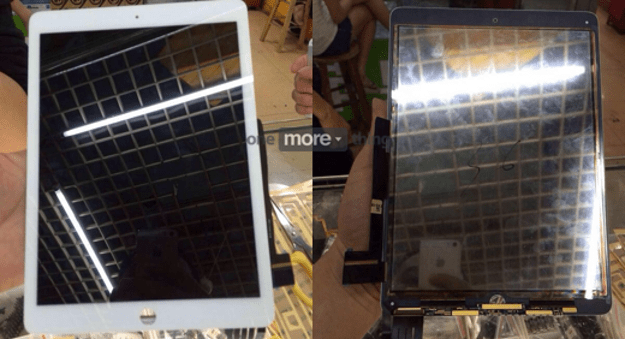 The flood gates have apparently opened in April as Apple device leaks have begun to hit the Internet at an alarming pace. From blueprints to cases to components, we’ve seen enough purported information about the iPhone 6 to build our own, but other than an analyst report on the next iPad’s release date, Apple’s next tablet has remained relatively well hidden. OneMoreThing.nl looks to fix that with the most promising next-gen iPad leaks yet — two photos showing off what might be the front of the iPad Air 2, complete with an integrated display.

The current iPad architecture separates the display and the panel, but with an integrated display, the next iPad Air could be even thinner than its predecessor. With the extra space, Apple would have more room for larger components, which could indicate a longer-lasting battery on this year’s model. Although the display appears to have gone through some alterations, the dimensions are reportedly the same. In other words, we aren’t looking at the rumored iPad Pro.

Speaking with MacRumors, iFixit co-founder Kyle Wiens “noted that the assembly could indeed be legitimate and use a manufacturing process similar to that seen on the Retina MacBook Pro.” It would increase repair costs, but repairing an Apple product has never been cheap.

You can see the images in higher quality below.