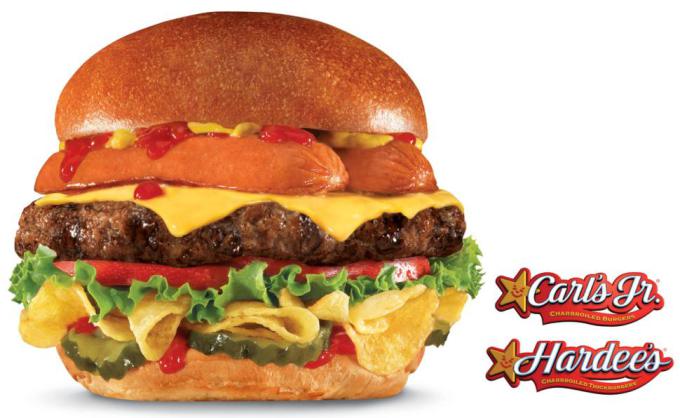 While fast food joints such as McDonald’s are undergoing identity crises and are even experimenting with serving kale to their customers, Hardee’s is still proudly being its greasy, disgusting self. Per Consumerist, Hardee’s this month has unveiled a new creation called the Most American Thickburger that stuffs both a hot dog and potato chips into one of its trademark massive hamburgers. Apparently, the idea is to eat everything you’d have at a classic American cookout at the same time with as minimal effort as possible.

RELATED: If you eat Taco Bell’s new breakfast, you may not live to see lunch

The Associated Press reports that the beast measures in at 1,030 calories and has 64 grams of fat. Amazingly, this is actually significantly slimmer than the original Hardee’s Monster Thickburger that debuted in 2004 and weighed in at 1,420 calories and 107 grams of fat. It seems that this behemoth has less fat because it only feature’s one giant beef slab instead of two — apparently, in order to fit in the hot dog and potato chips, the other beef patty had to go.

What inspired Hardee’s to do this? Brad Haley, chief marketing officer of Hardee’s parent company CKE Restaurants, explained to The Associated Press that “The hot dog is like a smoked meat product, so it’s not unlike bacon… we’ve had this idea, believe it or not, for a long time.”

This makes you wonder what other ideas Hardee’s has had “for a long time” but has so far not had the guts to unveil. Our personal bet is an entire bucket of deep fried check that’s placed between two large sandwich buns and then deep fried again before being smothered in ranch dressing. Come on, Hardee’s — let’s see what else is in your freaky fast-food meth lab.