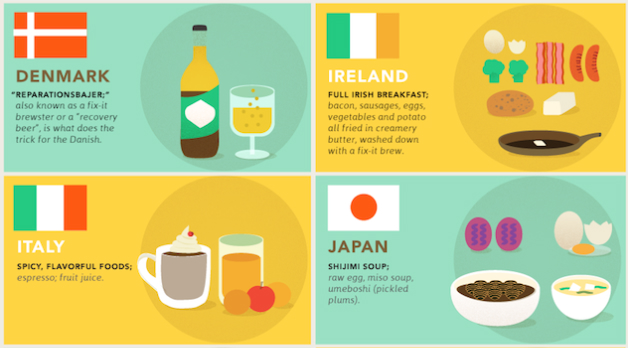 It’s Monday again, or a terrible start of the new workweek for those of you who have seriously partied over the weekend on account of that hangover you swore you’d never get again. One of the most annoying side-effects of heavy drinking, the hangover, can’t be really cured, and it’s not even completely explained from a medical standpoint. Nevertheless, that doesn’t mean there aren’t ways of dealing with it, and the following infographic will give you a bunch of suggestions from across the world for dealing with it, but also for preventing the next one.

Created by Confused.com a few years ago, the hangover-beating cheat sheet below offers you several alternatives of treating this “disease” before you leave for work on Monday. The list includes various meals and drinks suggestions, some more appealing than others.

For example, in Russia they drink pickle juice right out of the jar to cure a hangover. Turkey has a more complex meal that’ll get you over that hangover – called Kokorec, it’s a streetcar dish served on toasted bread and made with suckling lamb intestines, chopped tomatoes, thyme and pepper.

Korea has a “soup to remove a hangover” cure of its own. Made from a mix of coagulated ox blood, cabbage, cow bones, pork spine and vegetables, the Haejangguk can be also be found on the street.

In Ireland and U.K., they’d serve you a full local breakfast to fix that hangover, while drinkers from Denmark have an actual “recovery beer” for it – it’s called Reparationsbajer if you’re in the region.

The full infographic follows below, listing 11 meals for better dealing with hangovers from around the world, but also 6 tips for avoid taking in extra calories when you’re done drinking.

If all that fails, not drinking that much is believed in many cultures around the world to prevent hangovers and other side-effects, so you can try that next.