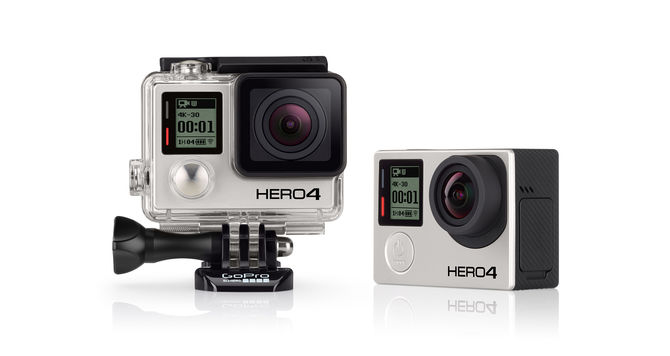 GoPro on Monday announced even better portable action cameras that video enthusiasts who like to record themselves in death-defying situations will certainly appreciate – and that’s particularly impressive because we have seen quite a few interesting GoPro videos shot with the older models. The cheapest GoPro camera costs $129.99, while the most expensive, high-end model can now record videos at an impressive 4K video resolution.

CHECK OUT: Our GoPro Hub for awesome action-packed videos

The GoPro Hero4 Black (above) costs $499 and features various video shooting modes including 4K at 30 frames per second (fps), 2.7K at 50fps and 1080p at 120fps, and it will offer additional improvements when it comes to sound recording, image quality and low light performance.

The GoPro Hero4 Silver is slightly cheaper at $399 and features a built-in touch display, but it won’t deliver the same video recording quality as the Black model. The Silver only offers video capture including 2.7K at 30fps, 1080p at 60fps and 720p at 120fps.

Finally, those buyers looking for the most affordable GoPro camera should know that the new Hero model costs just $130. For that price, users get 1080p at 30fps and 720p at 60ps, and 5-megapixel pictures. Even better, the camera comes directly in a “rugged, waterproof housing.”