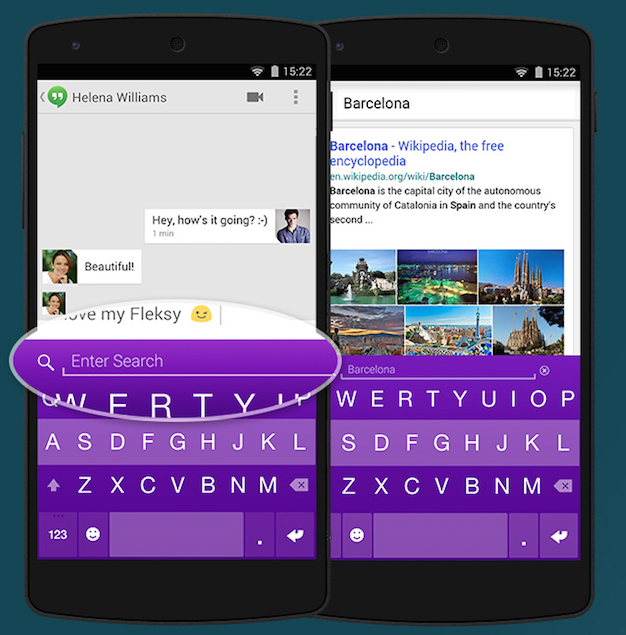 In addition to announcing a new partnership with Samsung, which will bring its paid keyboard app complete with a themes pack for free to Galaxy S6 and Galaxy S6 edge buyers, Fleksy made one more major announcement this week, introducing a brand new feature that you wouldn’t normally see in apps like this.

FROM EARLIER: Check out this cool keyboard app all Galaxy S6 owners will get for free

The company has partnered up with Yahoo to offer users instant access to web searches inside its keyboard app. The new feature further builds on new app functionality Fleksy introduced a few months ago, support for extensions, which lets users customize their keyboard app in various apps, whether that means turning it into an app launcher or using it for GIFs.

The Yahoo integration will be available via the same extension functionality, as a Search Extension, that will apparently bring users instant, contextual, results from the web when performing certain searches right inside the keyboard app, as seen in the top image

Fleksy introduced Extensions in December to enthusiastic user adoption. Extensions allow Fleksy users to use their keyboard as a platform and a hub for input options beyond typing – adding functionality such as GIF discovery, and an app launcher. Launching today, the Search Extension will combine the power of web search with the convenience and immediacy of the keyboard to deliver results faster.

“We couldn’t be more thrilled to partner with Yahoo in building the Search Extension,” said Kosta Eleftheriou, Co-founder and CEO of Fleksy. “This marks a major milestone for us. Due to the keyboard’s high engagement, opened 180 times a day on average, and its position at the front line of mobile interaction, we believe contextual search on the keyboard can present a transformative experience. Delivering Extensions with market leaders such as Yahoo is the first step in advancing that goal. ”

About Fleksy
Fleksy is a next generation keyboard that makes typing on any smart device fast and incredibly customizable. Fleksy has seen over 3 million downloads in a little over 12 months and ranked highly as the #1 paid app in 25 countries.

Officially the fastest smartphone keyboard in the world (Guinness World Record, May 2014 & November 2014), Fleksy is already used by millions of people in over 170 countries. It features the world’s most powerful typing technology, an award winning design, and is the only keyboard with fun and useful Extensions.