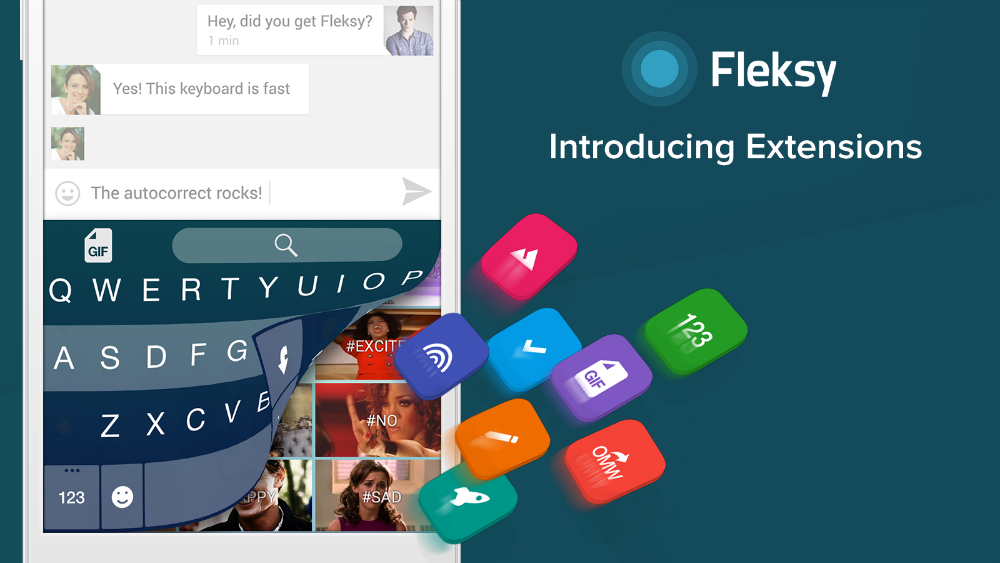 Fleksy, currently the world’s fastest smartphone keyboard, on Wednesday announced a massive update for both its iOS and Android versions of the app. The update includes a variety of new features, including several new theme options (complete with Frozen and Hunger Games branded options), and, most importantly, customizable extensions that’ll make both the iOS and the Android Fleksy apps a lot more interesting.

FROM EARLIER: Video: The world’s fastest keyboard just set a new record on the iPhone 6 Plus

The company says Fleksy is the first keyboard with customizable extensions, which users can simply select to add extra functionality to the app. On iOS there are five extensions including GIF support, a feature found in other iOS keyboards, and on Android there are seven extensions, with Fleksy being the first Android keyboard to support GIFs.

Additionally, Android users get one more interesting feature in Fleksy that lets them turn the keyboard into a Launcher.

The only potential downside is that users have just three slots for extensions, but more can be unlocked via in-app purchases.

“We’re unlocking the keyboard’s true potential with this update,” Fleksy CEO and co-founder Kosta Eleftheriou said. “Keyboards are our primary input method. With Extensions we mean to revolutionize not only text input, but all input; making it faster, easier, and more fun. Why switch back and forth between apps to do things that can be done via the keyboard?”

The latest versions of Fleksy can be downloaded from the App Store and Google Play Store — see source links for more details. The full press release follows below.

San Francisco, CA, December 17 2014 – After 3 million downloads in its first year, Fleksy today launched a massive 5.0 update to its iOS and Android keyboard, redefining Fleksy as the hub of all your input needs.

The Fleksy 5.0 update introduces Extensions – customizable functionality enhancements for the keyboard, which turn Fleksy into a platform with multiple fun and useful input options. Fleksy becomes the first Android keyboard with GIF support as their GIF Extension makes finding and sending GIFs as easy as emoji. Other Extensions initially available include the option to use Fleksy as an Android launcher, add a Number Row at the top of the keyboard, an Editor for easier cursor control, a Rainbow Pop effect on typing, and typing shortcuts.

“We’re unlocking the keyboard’s true potential with this update,” said Kosta Eleftheriou, Fleksy CEO and Co-Founder. “Keyboards are our primary input method. With Extensions we mean to revolutionize not only text input, but all input; making it faster, easier, and more fun. Why switch back and forth between apps to do things that can be done via the keyboard?”

Extensions are activated in the Fleksy app by assigning them to “Slots”. Initially, all users will receive 3 slots FREE, which can be used to set their initial Extensions. Extensions may be activated and deactivated at will, but additional slots can be purchased within the app.

The launch of Extensions is accompanied by a major redesign of the Fleksy app, along with a hugely expanded keyboard theme offering. 30 premium themes are now available, including branded themes from popular films such as Frozen and The Hunger Games.

“Customization is extremely important to our users,” said Ioannis Verdelis, COO and Co-founder of Fleksy. “We’re excited to meet that need through an unprecedented level of customization with our biggest theme update ever, and the launch of Extensions. These Extensions are just the beginning too…”

About Fleksy
Fleksy is a next¬ generation keyboard that makes typing on any smart device fast and easy, and the #1 paid app in 25 countries on iOS.
Officially the fastest smartphone keyboard in the world (Guinness World Record, May 2014 & November 2014), Fleksy is already used by millions of people in over 170 countries. It features the world’s most powerful typing technology, an award winning design, and is the only keyboard with fun and useful Extensions.