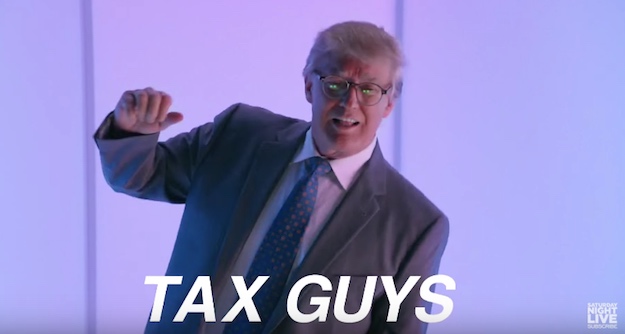 Who knew that Donald Trump can dance? Well, actually, he can’t really, but that didn’t stop the Republican presidential candidate from at least trying get his groove on. While hosting Saturday Night Live this weekend, Trump showed up as a dancing “tax guy” during a spoof of Drake’s universally lampooned “Hotline Bling” video.

Trump later said that “Drake is a much better dancer than I am”, but the jury is still out on that one. At the very least, Drake does have a leg up on Trump in the singing department.

In any event, the video of Trump doing his thing is embedded below for your viewing enjoyment. Also make sure to keep an eye out for a Martin Short cameo where the legendary comic reprises his famed Ed Grimley character.

Not bad, but we’ve seen some arguably better spoofs of the video over the past few weeks.

As for the episode as a whole, it wasn’t bad. There were a definitely a few laughs here and there, but the episode didn’t really deliver any classic sketches or moments that are liable to stand the test of time.