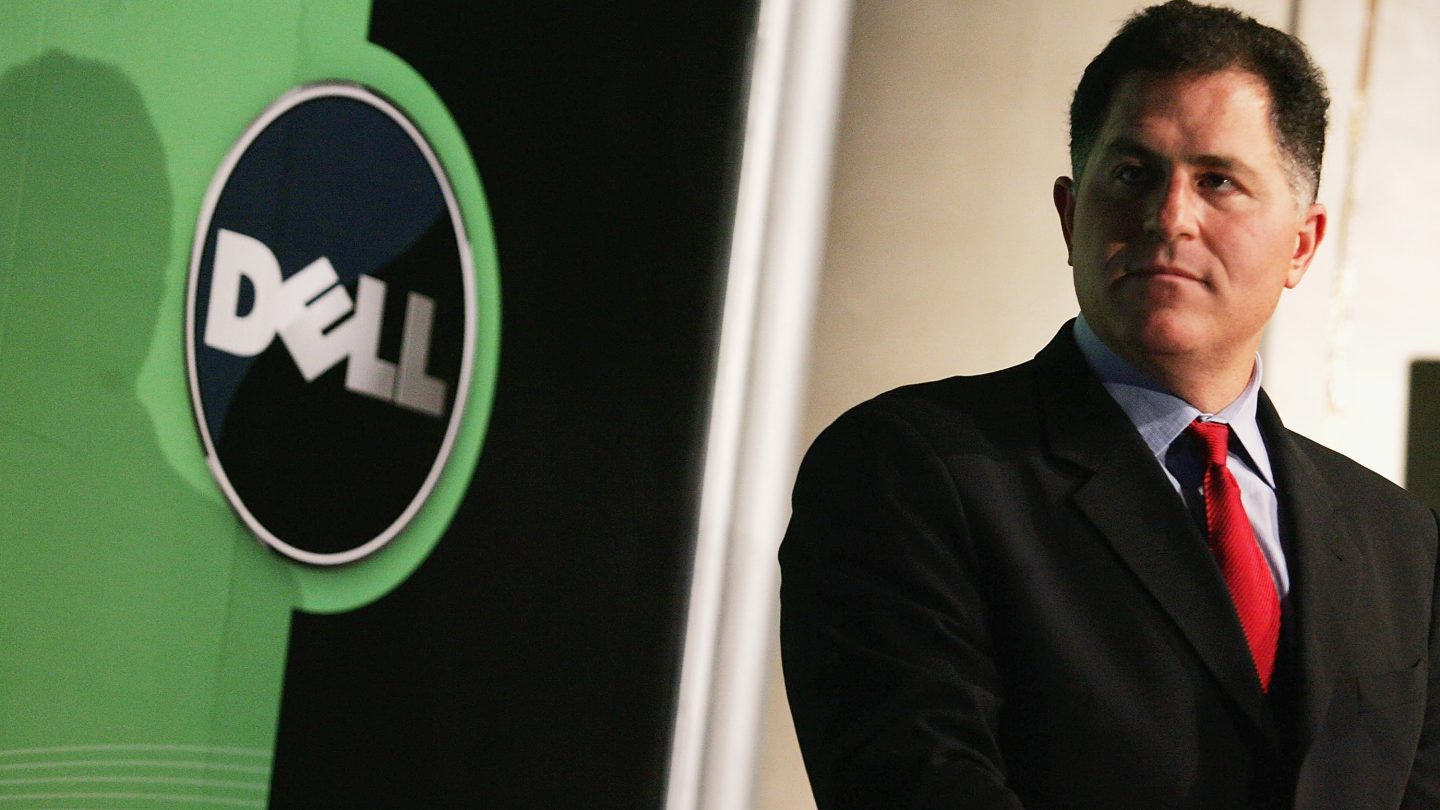 After various reports claimed that Dell had been eyeing EMC as a merger target, Dell on Monday finally confirmed it’s indeed going to purchase the company, creating a “premier end-to-end technology company.”

Dell is paying around $67 billion for EMC, which makes it one of the biggest tech industry mergers ever, according to Bloomberg.

With EMC under its arm, Dell should get a significant boost in selling servers to enterprise customers. EMC offers storage and data processing businesses which can be coupled with Dell’s data center business to spawn more interesting offers that would better compete against rivals including Amazon, HP, and others.

Brings together the industry’s leading innovators in digital transformation, software-defined data center, hybrid cloud, converged infrastructure, mobile and security
EMC stockholders to receive approximately $33.15 per share (based on the assumptions described below) in a combination of cash as well as tracking stock linked to a portion of EMC’s economic interest in the VMware business
VMware to remain an independent, publicly-traded company

Dell Inc. and EMC Corporation today announced they have signed a definitive agreement under which Dell, together with its owners, Michael S. Dell, founder, chairman and chief executive officer of Dell, MSD Partners and Silver Lake, the global leader in technology investing, will acquire EMC Corporation, while maintaining VMware as a publicly-traded company.

Under the terms of the agreement, EMC shareholders will receive $24.05 per share in cash in addition to tracking stock linked to a portion of EMC’s economic interest in the VMware business. Based on the estimated number of EMC shares outstanding at the close of the transaction, EMC shareholders are expected to receive approximately 0.111 shares of new tracking stock for each EMC share. Assuming, for illustrative purposes, a valuation for each share of tracking stock of $81.78, the intraday volume-weighted average price for VMware on Wednesday, October 7, 2015, EMC shareholders would receive a total combined consideration of $33.15 per EMC share and the total transaction would be valued at approximately $67 billion. The value of the tracking stock may vary from the market price of VMware given the different characteristics and rights of the two stocks.

The EMC Board of Directors approved the merger agreement and intends to recommend that stockholders of EMC approve the agreement.

The combination of Dell and EMC will create the world’s largest privately-controlled, integrated technology company. The company will be a leader in the extremely attractive high-growth areas of the $2 trillion information technology market with complementary product portfolios, sales teams and R&D investment strategies. The transaction combines two of the world’s greatest technology franchises with leadership positions in servers, storage, virtualization and PCs and it brings together strong capabilities in the fastest growing areas of the industry, including digital transformation, software-defined data center, hybrid cloud, converged infrastructure, mobile and security.

Since becoming a private company, Dell has had the flexibility and agility to focus completely on customers and invest for long-term results. The transaction will unite Dell’s strength with small business and mid-market customers with EMC’s strength with large enterprises to fuel profitable growth and generate significant cash flows. The combined company will consist of strategically-aligned businesses and incubated high-growth assets, fostering innovation, enabling customer choice and attracting and retaining world-class talent .

“The combination of Dell and EMC creates an enterprise solutions powerhouse bringing our customers industry leading innovation across their entire technology environment. Our new company will be exceptionally well-positioned for growth in the most strategic areas of next generation IT including digital transformation, software-defined data center, converged infrastructure, hybrid cloud, mobile and security,” said Mr. Dell. “Our investments in R&D and innovation along with our privately-controlled structure will give us unmatched scale, strength and flexibility, deepening our relationships with customers of all sizes. I am incredibly excited to partner with the EMC, VMware, Pivotal, VCE, RSA and Virtustream teams and am personally committed to the success of our new company, our customers and partners.”

“I’m tremendously proud of everything we’ve built at EMC – from humble beginnings as a Boston-based startup to a global, world-class technology company with an unyielding dedication to our customers,” said Joe Tucci, chairman and chief executive officer of EMC. “But the waves of change we now see in our industry are unprecedented and, to navigate this change, we must create a new company for a new era. I truly believe that the combination of EMC and Dell will prove to be a winning combination for our customers, employees, partners and shareholders.”

“We are excited and honored to invest in the outstanding businesses built by Joe Tucci and his world-class management team. This is an extraordinary opportunity to continue and expand our partnership with the iconic technology entrepreneur Michael Dell and his talented team,” said Egon Durban, managing partner of Silver Lake. “We believe the strategic integration of EMC and Dell will generate unparalleled depth and breadth across servers, storage, virtualization and the next era of converged infrastructure, creating a global technology platform poised for sustained long term growth and innovation in the years to come. We are doubling down and increasing our investment in this differentiated market leader for the next paradigm of enterprise computing.”

VMware will remain a publicly-traded company and continue to provide customers value through leading software- defined data center technology, together with its cloud, mobile and desktop offerings. This transaction is expected to accelerate VMware’s growth across all of its businesses through significant synergies with Dell’s solutions and go-to-market channels. VMware remains committed to investing in and partnering with its strong, industry ecosystem.

The transaction is expected to be financed through a combination of new common equity from Michael S. Dell, MSD Partners, Silver Lake and Temasek, the issuance of tracking stock, as well as new debt financing and cash on hand. There are no financing conditions to the closing of the transaction.

Mr. Dell and related stockholders will own approximately 70 percent of the company’s common equity, excluding the tracking stock, similar to their pre-transaction ownership.

Following completion of the transaction, Mr. Dell will lead the combined company as chairman and chief executive officer. Mr. Tucci will continue as chairman and chief executive officer of EMC until the transaction closes. Dell’s headquarters will remain in Round Rock, Texas, and the headquarters of the combined enterprise systems business will be located in Hopkinton, Mass.

Historically, Dell and EMC have maintained conservative financial policies, and have strong track records of cash flow generation and debt reduction. The transaction is expected to have a neutral to positive impact on Dell’s current corporate credit ratings. The combined company will focus on rapidly de-levering in the first 18 to 24 months following the closing of the transaction, and on achieving and maintaining investment grade debt ratings.

In connection with the financing of the transaction and prior to or at the time of its closing, Dell expects to redeem any outstanding 5.625% Senior First Lien Notes due 2020.

The transaction is subject to customary conditions, including receipt of required regulatory and EMC stockholder approvals. The transaction is expected to close in the second or third quarter of Dell’s fiscal year ending February 3, 2017 (within the months of May to October 2016).

For further information regarding all terms and conditions contained in the definitive merger agreement, please see EMC’s Current Report on Form 8-K, which will be filed in connection with this transaction.

Dell and EMC will host a conference call with media and industry analysts today at 8:45 a.m. Eastern Time. The call will be webcast at https://engage.vevent.com/rt/dellincorporatedao~101215.

About Dell
Dell Inc. listens to customers and delivers worldwide innovative technology, business solutions and services that give them the power to do more. For more information, visit http://www.dell.com.