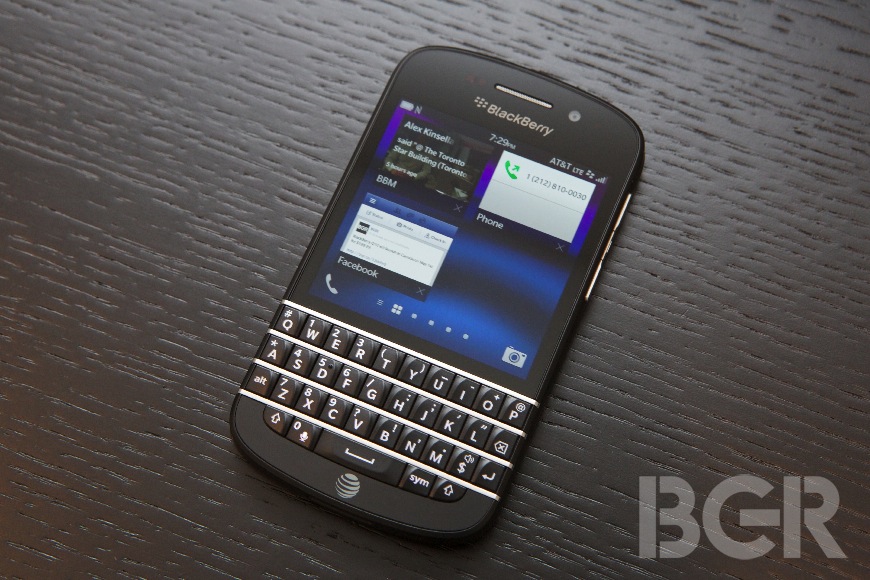 Looking at the Q10’s design invokes mixed feelings. The front of the smartphone seems clean and almost modern, but the back feels tacky with a half-rubberized, half-sticky texture. BlackBerry says the back parts of the phone are made out of weaved glass, giving it a carbon fiber look and comparable durability.

It’s an interesting application, but I think there’s a reason why we haven’t seen this material used on phones before and that’s because of the feel. But more importantly, every single bit of dust, dirt, hair or any other particle that touches it gets stuck on the surface. Switching gears to the material of the phone itself, the mid-plate or frame of the Q10 is a high quality PVD-coated metal and it looks great, for the most part. It’s the same of application that’s popular on some watches nowadays, and should hold up to lots of abuse.

The one thing I would add, however nitpicky it may seem, is that the frame of the phone I am using looks a little worn down. I’m not sure if this is due to some cost-cutting to keep manufacturing expenses down, but that would be my guess. Typical users will probably not notice anything, but it’s something to keep in mind when you have companies like HTC and Apple completely killing it on fit and finish, and a company like Samsung that still relies on plastic, but manages to get the best possible result from the plastics it uses.

Going over the phone there’s a volume up, down and mute key on the right, a speaker and microphone on the bottom, microUSB and mini-HDMI ports on the left, a 3.5-millimeter headphone jack and a power / on / off button on the top alongside a secondary noise canceling microphone. The Q10 uses a different battery than the Z10 (this is BlackBerry, after all people), but under the hood you will find an NFC antenna and a microSD card slot for extra memory. Lastly, there’s an 8-megapixel autofocus camera with that absolutely blinding BlackBerry flash that we all love to hate, or hate to love. Touching on the battery real quick, it performed great. Standby time was impressive, and it powered through days of on and off usage without a hitch. Phone calling also worked quite well, with loud and clear calls, and a great speakerphone. The screen on the Q10 is noticeably different from the LCD on the Z10. It’s square, and has a resolution of 720 x 720 pixels, and it measures only 3.1-inches diagonally. The pixel density is actually quite great, but it’s an AMOLED display, and I would say a lower quality AMOLED display, especially compared to the ones being used in most high-end smartphones today.

It looks pixelated to me, and colors really aren’t accurate at all. Instead, they’re painfully over-saturated. BlackBerry told me that most of the user interface, where possible, was changed to black from light colors to help with battery life. AMOLED displays don’t use the same amount of power displaying black, so this was a common battery life-extending technique in the smartphone space. It’s just not that common any longer, however, since the industry has moved on to better displays with which this isn’t necessary.

The keyboard on the BlackBerry Q10 is amazing.

It takes a little while to get used to typing on the Q10 because the keys are no longer curved, like a smiley face, but straight. This keyboard is exceptional, though. BlackBerry through and through. Navigation is another story. I really miss the BlackBerry back button and menu button on the Q10 because of the hardware keyboard. It’s not something you think of using the all-touch Z10, but because the Q10 is more like the QWERTY phones that made BlackBerry famous, it’s difficult to rely on touch navigation for everything, especially when you’re typing something quickly and need to go through a couple of options to get something done.

I also felt that a trackpad was something I would have enjoyed on older BlackBerry phones as well, again, to the same point as before. Keyboard shortcuts are absolutely awesome, though. Most of the ones you know and love still work, and in most apps, too. Start composing an email right from the home screen by typing “email” and then the person’s address, or start tweeting, or even send a BlackBerry Messenger message by just typing “bbm” and a contact’s name.

BlackBerry 10 is also getting an update to 10.1, and the Q10 is the first phone to feature the new software. It includes enhancements to the general operating system in terms of speed, but also brings the following to the BlackBerry platform: better copy and paste control, PIN messaging, suggested contacts when composing messages, HDR photos, landscape calendar view, account-specific notifications and more.

There is still no true push email on here, something I’m still in disbelief over, unless you’re using a Microsoft Exchange account. Navigation also still seems clunky when launching BlackBerry Messenger or another app from the Hub, because you then have to go all the way back into the Hub to clear it out. The hardware keyboard actually adds way more frustration that it alleviates, forcing you to use a small, worse quality display that is harder to touch and navigate on than a big beautiful LCD. And, the Q10 doesn’t scream luxury to me either. It’s more like a mid-range phone, not a flagship QWERTY, especially compared to the BlackBerry 9900 — which is still the best keyboard-equipped smartphone BlackBerry has ever made.

If you want to try BlackBerry’s latest hardware and software, and have to have a BlackBerry, go with the Z10. It’s not the best smartphone choice you can make, but it’s certainly better than the Q10.