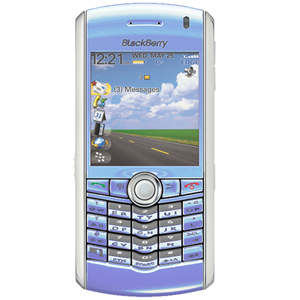 I guess we shouldn’t expect a review unit from RIM, right? The BlackBerry Pearl 2 or “Komet” (internal codename) has secretly whispered some fantastic specs and features in our ear today. Some earth-shattering BlackBerry Pearl 2 new features revealed? We could start off with the external MicroSD card slot, or the stereo Bluetooth, but that’s not that interesting to most. The really interesting, and juicy details, start now! The BlackBerry Pearl 2,or Komet, or 8110, or 8120, or 8130 will feature a 3.2 megapixel camera. The difference with this camera, as reported to us, is that it will be used horizontally. Just like other high end camera phones. The colors we reported here first were pretty much spot on; metallic red, blue, gold, and black. In addition to the new camera, the P2 will include Windows Media DRM & MTP support. Also look for motion lock, and a built-in 3.5 mm headset jack just like the BlackBerry Curve. For all you freaks out there who love to hear yourself speak, the Voice Notes application has been enhanced and given a complete makeover; it will be housed as a component within the “Media” application (now up to five multimedia applications) and allow you to save all of your recordings and play them back upon command from your new collection of self-therapy sessions. Oh yeah, RIM is planning a mega huge marketing initiative to launch the Pearl 2. We have a fantastic rundown of the features and specs so make sure you check them out, after the break!