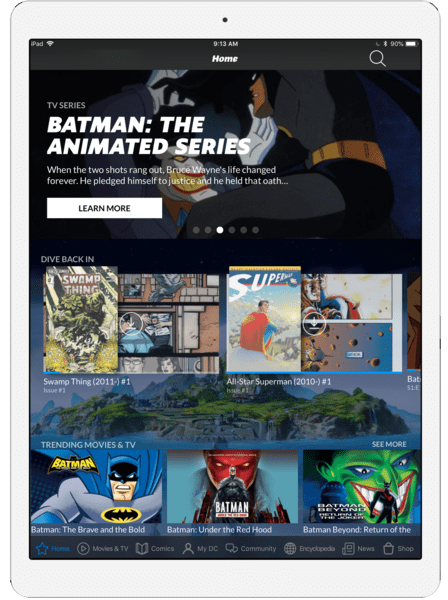 DC Universe, the new streaming service from the comics giant that was announced in June at Comic Con in San Diego, is finally here and will go live this weekend.

Starting tomorrow, you’ll be able to download the service in the U.S. on iOS, Android, , and Roku, as well as via the desktop and mobile web. The launch is timed to coincide with “Batman Day” (yes, that’s a thing) and will make tons of Batman movies, animated series, comics and giveaways available to users through the rest of the month.

Here’s a rundown of some of the Batman content that will be available, per DC:

In terms of the details about the service itself, membership costs $7.99 per month or $74.99 annually, and benefits include exclusive original live-action and animated series, classic TV series and films, a selection of digital comic books, breaking news including the all-new DC Daily show, a DC-centric encyclopedia and access to exclusive merchandise. All memberships kick off with a week-long free trial, and other goodies you get include the ability to connect with other DC fans, earn rewards and participate in contests.

The first original series to premiere on the service will be Titans, coming Oct. 12. It will be followed by other exclusive series like Young Justice: Outsiders, Doom Patrol, Swamp Thing, Harley Quinn and Stargirl.

“This weekend as we celebrate one of our most iconic heroes, we launch a digital service that unites Super Heroes from every corner of the DC universe, from our most treasured films and comics to exclusive originals all-in-one place,” Warner Bros. Digital Networks President Craig Hunegs said in a statement released about the launch. “DC Universe stands out as a fan-first service in what is quickly becoming a crowded marketplace of consumer choices.”