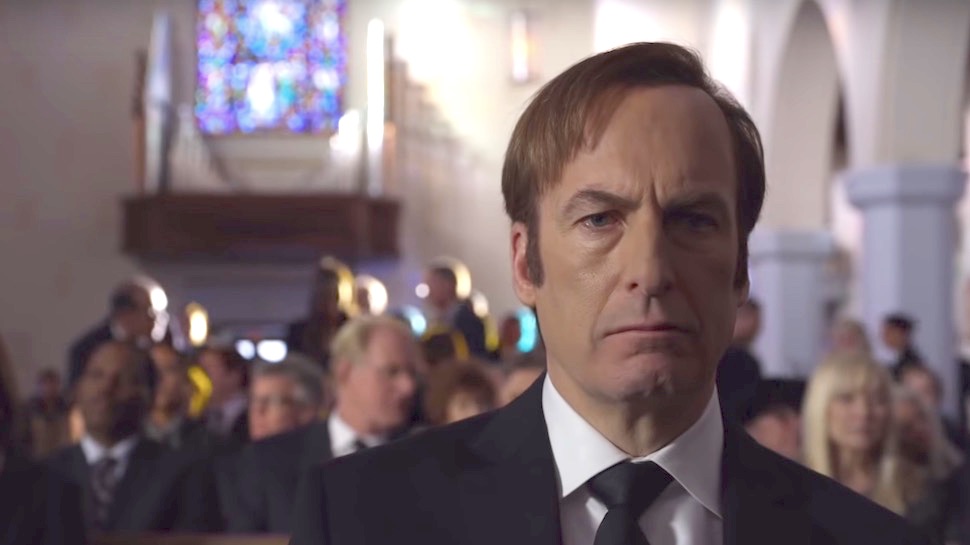 “Do you know why God made snakes before he made lawyers?” cracks Jimmy McGill in the season four trailer for Better Call Saul, the new season of which apparently will move us a lot closer to the events of Breaking Bad.

“He needed the practice.”

San Diego Comic Con has given us a ton of Better Call Saul news to tide us over until the new season premieres August 6 on AMC. For starters, a trailer that shows Jimmy, shady and ever-scheming in the wake of his estranged brother Chuck’s death. The reappearance of menacing drug boss Gus Fring. Mike Ehrmantraut moving closer to his life as an enforcer.

One of the biggest questions still bedeviling fans — when, oh when, will Jimmy finally break bad and turn into the Saul Goodman we know and love? Some of the early commentary out about season four suggests he’s getting there, but that there are at least a couple more seasons left before Jimmy’s descent into the heart of darkness is complete. But dark — that’s the word everybody keeps using about this new season — and about Jimmy’s storyline, specifically.

From an AMC preview press release: “In Better Call Saul‘s fourth season, Chuck’s death catalyzes Jimmy McGill’s transformation into Saul Goodman. In the wake of his loss, Jimmy takes steps into the criminal world that will put his future as a lawyer — and his relationship with Kim — in jeopardy. Chuck’s death deeply affects former colleagues Howard and Kim as well, putting the two of them once again on opposite sides of a battle sparked by the Brothers McGill.”

Also among the lingering questions, per Thrillist: Chuck took a $9 million payout to leave HHM. What happens to that money? Is that the cash that seeds his new life as Saul Goodman?

Creator Vince Gilligan, during an AMC event in New York, described where things stand this way. “On the Venn diagram of Breaking Bad and Better Call Saul, the overlap in the center is getting bigger and bigger.” Thrillist also details the introduction of “Lalo,” a Breaking Bad character who we never saw on camera, in season four of Better Call Saul.

Rest assured folks. Things are moving closer to Walter White and all the bad things that go with him. And as if that wasn’t enough — Gilligan has confirmed in at least one interview that Walter himself will likely appear in Better Call Saul at some point. Not season four, though, unfortunately.

The new season will premier at 9 p.m. eastern and air on Mondays through October 8.