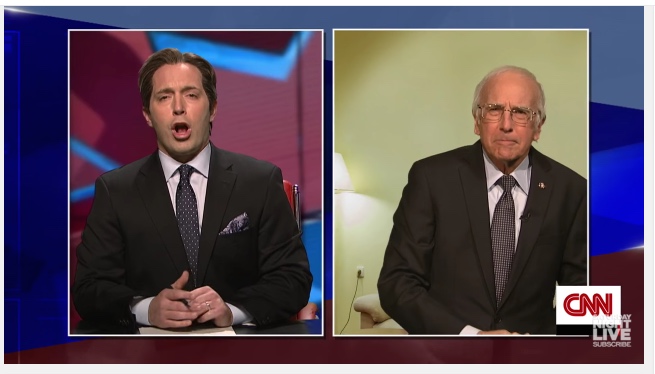 Election season is in full swing and Saturday Night Live continues to take comedic advantage of what might very well be the strangest and most entertaining Presidential race in decades. SNL’s most recent effort kicked off this weekend with Dr. Ben Carson (played by Jay Pharoah) endorsing Donald Trump (expertly played by Darrell Hammond).

“Yes, Donald and I are very different,” Carson began. “We’re like night and day. Ebony and orange.”

Shortly thereafter, the sketch switched its focus to Larry David, who once again returned to the show to reprise his impersonation of Presidential candidate Bernie Sanders.

DON’T MISS: From Apple to McDonald’s: What 15 famous company logos used to look like

From there, Sanders went on to hilariously skewer his passionate and vocal fan base.

“I want to thank everyone who voted for me and apologize to everyone else for making your Facebook feeds so so annoying,” Sanders said. “I mean, I love my supporters, but they’re too much, right? I’m great, but not five posts a day great. With all due respect to my supporters, get a life!”

“I have the voters,” Sanders continued. “My message is resonating with a very diverse group of white people. And I’ve got supporters of all ages. 18 year olds, 19 year olds. Eh, that’s it. The young people love me Tapper, because I’m like them. I’ve got a lot of big plans and absolutely no idea on how to achieve them.”

The show’s entire cold open can can be seen below.