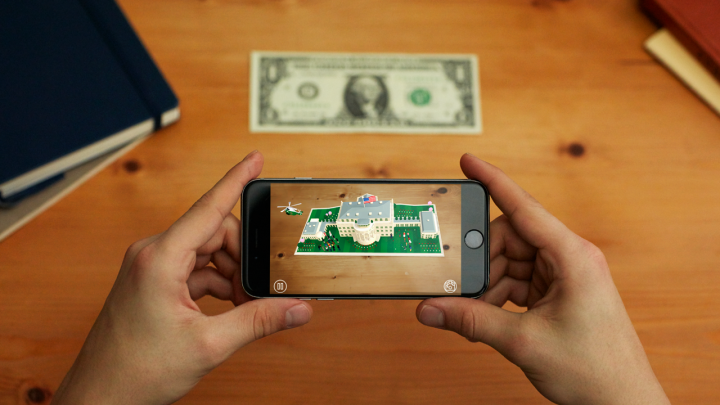 The United States government has just published an iOS app that uses augmented reality to identify dollar bills and create three dimensional models of the White House on top of them. No, you didn’t accidentally click over to The Onion, this is an actual real thing.

The app, which is called 1600 (iOS, Android) — in reference to the White House address of 1600 Pennsylvania Avenue — utlizes the iPhone camera to search detect the paper currency. Then, like magic, a little 3D White House pops up, complete with a waving flag and a flurry of activity.

MUST SEE: Watch Jyn Erso go to town on some stormtroopers in the first official ‘Rogue One’ clip

The idea is that the app will show you what it’s like at the White House year-round as it moves through the seasons. You’ll see snow covering the ground in the winter and fireworks on the Fourth of July, and the entire experience is narrated by White House Press Secretary Josh Earnest.

“As you experience a year at the White House – from the Easter Egg Roll to a State Arrival Ceremony – you’ll see that even as seasons and people change, the White House endures as an institution of American democracy,” Earnest says in a blog post announcing the app’s release.

The app was designed with the help of Nexus Studios and in partnership with the White House Historical Association, so it’s got authenticity in spades. It’s a neat little augmented reality app and it’s free, which makes it even better, and if watching a dollar bill give birth to a pint-sized White House isn’t the perfect metaphor for American democracy, I don’t know what is.