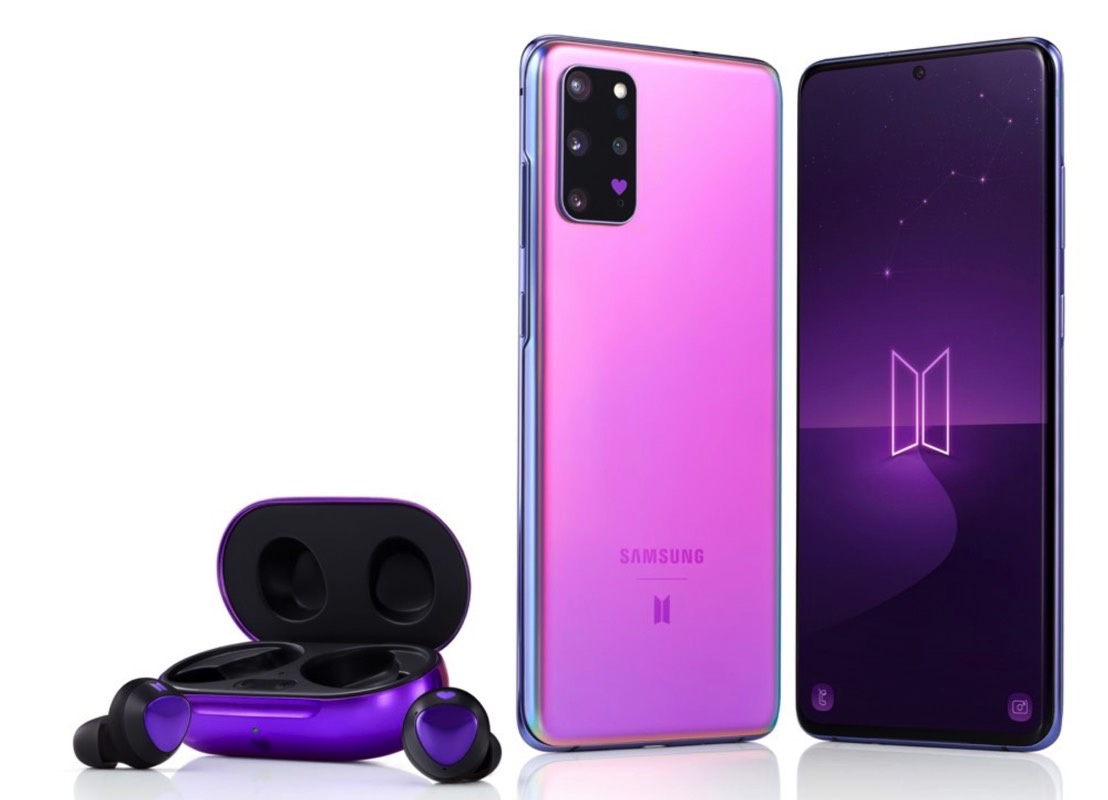 The Galaxy S20 series is hardly a financial hit for Samsung, but the Korean giant hasn’t given up hopes to increase sales. The company launched a new smartphone subscription plan that includes the Galaxy S20. Moreover, the S20 Ultra version got a notable $300 discount on Amazon a few days ago, although that was a one-day sale type of deal. But Samsung’s best bet on increasing S20 sales might be the special edition Galaxy S20 version that was leaked last week, a purple model that comes with matching Galaxy Buds+ and a wireless charger. While the color does look great, the real “magic” of the phone comes from BTS. The purple Galaxy S20+ and the accessories come with BTS branding, complete with hearts and logos, as well as a BTS theme on the device.

When the first images leaked a few days ago, we told you that the special edition handset might not be available in all markets where Samsung has already launched the Galaxy S20 series. That’s what Samsung usually does with every Galaxy S series. A few months after the launch of the handset, Samsung supplements the color palette with options that are usually more attractive than the initial colors. The new colors usually launch in certain markets at first, and it’s not a guarantee that all international markets will ever get them.

The BTS Galaxy S20+ version will be a major exception, one that’s somewhat understandable given the K-pop’s band huge following worldwide. The BTS-branded versions of Galaxy S20+ 5G and Galaxy S20+ won’t launch only in Korea, as you might have suspected, but internationally. The same goes for the BTS Galaxy Buds+.

The phones will come preinstalled with the expected BTS themes and a fan community platform called Weverse, The Korea Herald notes.

The Galaxy S20+ 5G BTS edition will cost 1.397 won in Korea, or approximately $1,155, with preorders set to begin on July 1st. The BTS Buds will be available starting Monday at Samsung retail stores and at Weverse Shop. Online preorders will start on Friday, with the wireless earbuds priced at 220,000 won ($180) in the country.

The devices will be available globally on July 9th, a date that marks the seventh anniversary of the BTS ARMY fandom.

Separately, The Verge notes that preorders will come with free BTS posters. Buyers who get both the new S20 Plus and the Buds will get a 50% discount on the wireless earphones. The BTS-branded devices will be available on Amazon starting on Amazon on the same July 9th.

Unfortunately, Samsung isn’t also making Galaxy S20 and S20 Ultra versions of the BTS model, so you’ll have to settle for the Plus model.