The acceleration in Tesla’s Model S P100D is absolutely ludicrous, with or without the California-based car maker’s pricey performance option and “Ludicrous Mode” Easter egg. There is simply no other widely available production car on the planet that can pin passengers’ heads back like Tesla’s top-of-the-line Model S. So, when Tesla CEO Elon Musk tweeted that a new software update would bring even faster acceleration to the P100D, it was a bit difficult to believe. As it turns out, however, the company’s latest update has managed a new 0-60 record that is even faster than Tesla thought it would be.

In a tweet last month, Musk stated that early tests of the Model S P100D’s updated Ludicrous Mode were “promising,” with the car having achieved a blistering 0-60 mph time of 2.34 seconds using the Motor Trend spec. Well, Tesla’s big update is now available, and Motor Trend got its hands on a fresh new Model S to test the update.

The results were nothing short of pure insanity.

In Motor Trend’s tests, the newly update Model S P100D managed a 0-60 mph time of just 2.28 seconds. Or, to be more accurate, 2.275507139 seconds. That’s faster than a Porsche 911 Turbo S, and faster than a Ferrari LaFerrari. In fact, no production car had ever cracked the 2.3-second mark in any of the magazine’s tests until now.

“Launching a Model S P100D (weighing 5,062 with gear and driver) in full-on Ludicrous Easter-egg mode snaps your body in a manner that is utterly impossible to replicate in any other street-legal production car on normal tires and dry asphalt at a mid-$100,000 price point,” Motor Trend’s Frank Markus and Brian Brantley wrote. “We regard 0-30-mph acceleration times as the benchmark for how hard a car launches, and this new Tesla gets there 0.05 second ahead of the next quickest (aforementioned) 0.92-second 911 Turbo S. The two run pretty even through 40 mph, after which the Tesla pulls ahead, maintaining a 0.2-second lead from 60 mph through 90 mph. The two cross the quarter-mile mark together at 10.5 seconds, at which point the Tesla is running 125.0 mph, and the Porsche is traveling 6.8 mph faster.”

The following graph shows the Model S P100D’s acceleration compared to both of the aforementioned supercars: 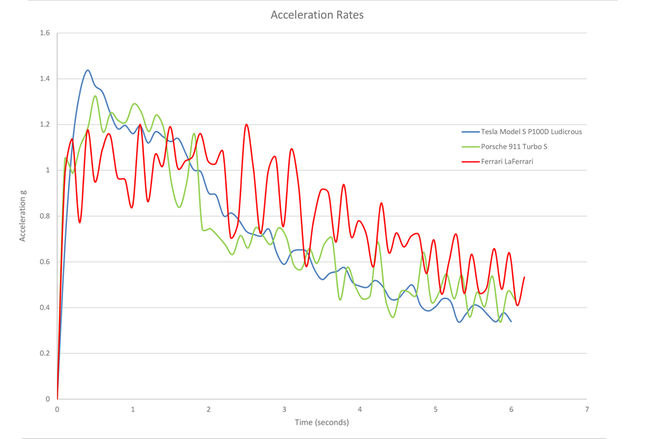 Tesla’s P100D with the performance package that includes Ludicrous Mode starts at $134,500, which seems like a tall order until you consider the car’s competition. Porsche’s 911 Turbo S will set you back $188,100 without a single option, and the 2017 Ferrari LaFerrari costs a perfectly reasonable $1.7 million.