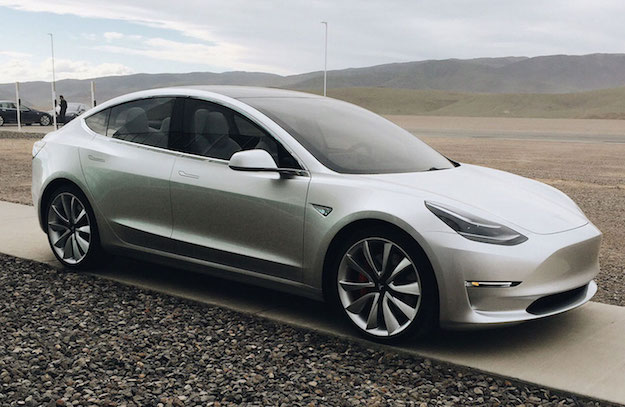 Hundreds of thousands of Tesla fans have been throwing money at the company to buy its cheapest electric car yet, securing their place in line to purchase the Model 3. Many of them preordered the car even before Tesla revealed its design and specs. In the meantime, almost everything is known about the Model 3 at this point, but a new report reveals hidden design details that might make Tesla’s new Model 3 one of the best electric cars money can buy in any price range. At least, for the time being.

Tesla’s Model 3 has to have a smaller battery to be more affordable than other models, but that doesn’t mean it’ll have reduced range. Tesla already said that Model 3 should be able to travel over 215 miles on a single charge of a battery that’s smaller than 60 kWh. How is it possible? Aerodynamics.

Elon Musk also said that Model 3 will have a 0.21 Cd drag coefficient, which would make the car the most aerodynamic mass production car ever made, according to Electrek.

Tesla’s Model S and Model X already achieved the lowest drag coefficients in their respective segments, but Model 3 will be even better. How is that possible? Exa’s vice president of ground transportation application Ales Alajbegovic speculated on the aerodynamic design of Model 3, suggesting that certain design lines – like that ugly grille – are intentional choices meant to reduce drag.

Tesla is rumored to use Exa’s digital simulation tool to develop its cars, but Exa doesn’t have access to results of those tests.

“Tesla uses Exa’s PowerFLOW digital simulation software in-house to design its cars,” the exec said. “We don’t see the process, but by analyzing the cars that Musk unveiled at the end of March, we can see where Tesla has innovated.”

He then explained that some of the design lines Tesla used in wheels and grille are all backed up by aerodynamics principles intended to make the car more efficient. These design tricks might make the Model 3 appear “ugly” when compared to other cars, but they’re key to making sure the car can offer incredible range in spite of a smaller battery.

“The differing turbine-blade styling not only comes across as fresh and appealing, but it also directs the flow of the air under the body of the car to reduce drag,” Alajbegovic said about the wheels. “That’s smart. Tesla could have used an active aero solution that closed the vanes on the wheels at speed, but they chose not to. In fact, it appears there are no active aero devices on the Model 3, which reduces the cost of making it.”

He then went on to explain the grille shape.

“Here only the shape remains. A more wedged front end, such as used by rear-engined Porsches, might well be more desirable aerodynamically, but Tesla could be using the grille shape with its rounded edges to control the air flow over the top or round the sides of the car,” Alajbegovic said.

He continued, “The Model 3 also employs air curtains in the lower fender that exit ahead of the front tires to provide a drag-reducing air stream over the wheels, while helping the flow transition smoothly around the sides of the vehicle,” he said. “The underbody is likely to be flat and smooth, ending with a rear diffuser to control the air coming from under the car.”

How important is aerodynamics? The exec said that by reducing drag from 0.32 to 0.24 – which seems like a minimal improvement – Tesla managed to increase the range by 50 miles.

So, before you complain about the Model 3’s design, best remember that the company may have compromised on style so that you can afford to purchase a car that drives for more than 200 miles on a charge. Knowing how much skill and expertise went into these design elements makes you wonder what other surprises are in store, and it might make you want Tesla’s Model 3 even more.