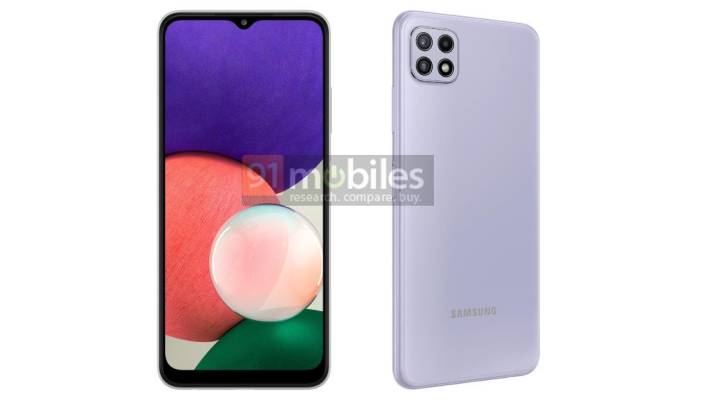 Samsung’s flagship phones are often the ones that get the most attention from publications like ours, but millions of people all around the world prefer to spend their money elsewhere, and are more than happy to use more affordable handsets rather than one that retails for over $1,000. In fact, despite their lower price tags, modern “budget” phones don’t have to compromise when it comes to important features, including support for 5G networks.

5G technology has yet to fully penetrate the market, but we are already getting a smattering of cheap 5G phones to go along with all of the pricey flagships from the top vendors. To that point, on Friday, 91mobiles shared new leaked images of the Galaxy A22, which is rumored to be Samsung’s cheapest 5G phone to date.

As was the case for several previous Galaxy A series phones, the Galaxy A22 features a teardrop notch at the top of the display which houses the selfie camera. There will be both a 4G model and a 5G model of this phone, and though the designs are virtually identical at a glance, there are a few subtle differences worth noting.

First up, the bezel on the 4G model appears to be slightly less obtrusive than that of the 5G model. Both phones also have a square camera module in the top left corner of the rear panel, but where the 5G model has three cameras and a flash, the 4G model squeezes four cameras into the module and shifts the LED flash beneath it.

All told, the Galaxy A22 4G is simply more powerful than its 5G sibling. Leaks claim that the 4G model will have a 6.4-inch HD+ AMOLED display, a MediaTek Helio G80 CPU, and a camera system with a 48MP+5M+2MP+2MP setup. The selfie camera clocks in at 13 megapixels, and the RAM and storage are still unknown.

As for the Galaxy A22 5G, you should expect a 6.4-inch FHD+ LCD display, a MediaTek Dimensity 700 CPU, and three cameras in a 48MP+5MP+2MP configuration. The 5G model is also slightly thicker and heavier than the 4G model, but both come with 5,000mAh batteries that support 15W fast charging.

Finally, and perhaps most important, the Galaxy A22 is expected to cost around KRW 200,000, which converts to about $180. For the sake of comparison, Samsung’s Galaxy A42 5G is priced at $359.99 on Amazon and launched for KRW 449,000 in South Korea last November. If the Galaxy A22 5G really is half the price of the Galaxy A42 5G, it could end up being one of the most affordable 5G phones on the market bar none.