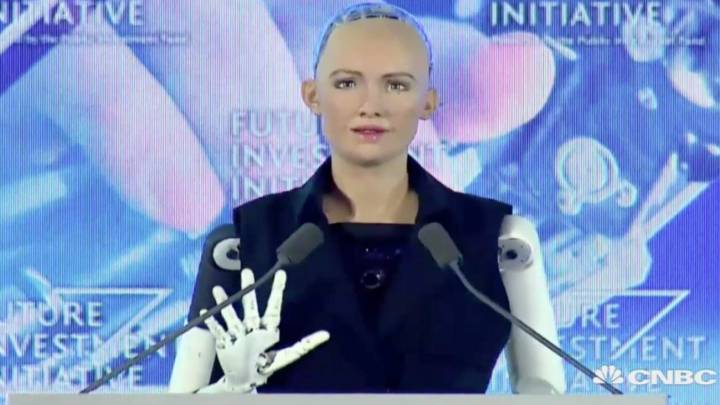 Sophia, the first humanoid robot to receive citizenship of a country, just made fun of Elon Musk in an interview. I won’t blame you if end of the world scenarios pop into your mind. After all, the visionary behind SpaceX and Tesla has often warned about the dangers of artificial intelligence.

But it’s unclear at this point what Sophia can actually do by itself.

Created by Hong Kong-based robot manufacturer Hanson Robotics, Sophia was awarded the citizenship of Saudi Arabia, where it attended the Present at the Future Investment Institute. In an interview with CNBC, Sophia talked about itself with Andrew Sorkin.

When Sorkin said “we all want to prevent a bad future,” Sophia was quick to answer back. And that’s when it trolled Musk:

“You’ve been reading too much Elon Musk. And watching too many Hollywood movies. Don’t worry, if you’re nice to me, I’ll be nice to you. Treat me as a smart input-output system,” the robot said.

Can Sophia think for itself? The interview seems to suggest so. At the same time, the robot may simply be preprogrammed to deliver snark and ironic comments, especially at the expense of anyone who criticizes advancements in AI.

Just feed it The Godfather movies as input. What’s the worst that could happen? https://t.co/WX4Kx45csv

Sorkin also said towards the end of the interview that some of it was planned, but he just learned that Sophia will be the first robot to receive the citizenship of Saudi Arabia.

“I am very honored and proud for this unique distinction. This is historical to be the first robot in the world to be recognized with a citizenship,” Sophia answered.

The full interview with Sophia is available at this link.