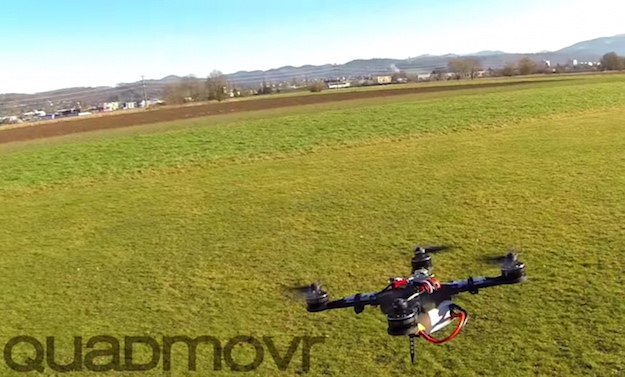 In a broad sense, most quadcopter drones you come across these days essentially do the same thing. They fly up, they fly down, and they zip along from point A to B. Now of course, some drones can fly higher and faster than others, and sure, some drones are equipped with more granular controls and HD video cameras, but the underlying principle is about the same.

The Quadmovr, however, is a drone that deserves a category all its own. A byproduct of the DIY drone community, the Quadmovr was reportedly put together by a pilot with the handle “Warthox.” What makes the Quadmovr stand out is that it’s insanely quick and nimble, almost impossibly so. As a result, it can perform maneuvers and, dare we say, stunts that most other drones can only dream of.

The Quadmovr has been around for a few months now, but over the weekend a new video of this hyper-quick drone in action was posted to YouTube for your viewing enjoyment. It’s hardly an overstatement to say that Quadmovr represents some next-level drone action.

If you’re at all interested in taking a Quadmovr for a test run, well, you’ll have to spend a few hundred bucks and assemble it yourself. In a profile on the Quadmovr published in Geek a few months ago, Warthox said that the total cost of the parts involved is about $673. Also of interest is that the Quadmovr can reach a top speed of about 86 MPH.