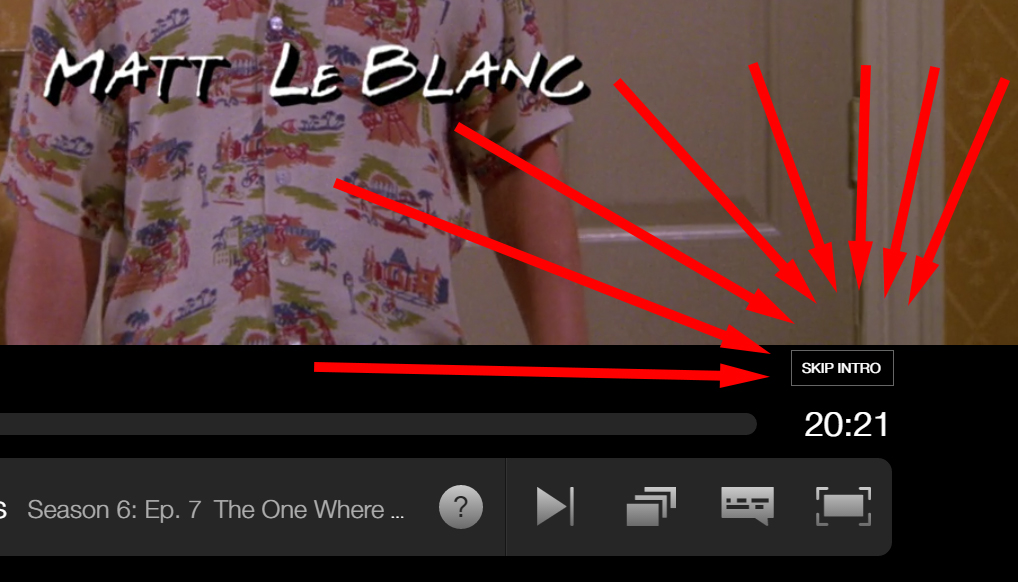 There’s no more painful first-world problem than having to always sit through the opening credits when you’re binge-watching a show. Sure, it’s fine if you’re marathoning Sherlock and each episode is already two hours long, but I think I’ve sat through the Friends opening credits so many times that the theme music triggers a subconscious reaction.

The fix has always been obvious: Netflix needs a button that lets you skip the credits. Given that opening credits are normally the same length for every episode of a TV show, it’s not exactly hard to implement from a technological level. It seems like someone at Netflix finally got fed up with having to manually skip, because a “Skip Intro” button is now alive and well on the Netflix web player.

So far, the button has only been spotted on a handful of Netflix shows, including Netflix originals like House of Cards but also third-party shows including Mad Men. Yes, it’s also available for Friends.

For the time being, the button only appears on the web browser. We’re assuming that it will show up on mobile apps relatively soon, although that will require an update. Rolling it out to smart TV and set-top box apps will likely only happen once it’s been tested, and Netflix can see that people are actually using it.

Between adding offline downloads and a skip intro button, there’s not much left on the Netflix Wish List. We still need proper playlists, and a way to see all those hidden genres that doesn’t involve a work-around would be nice.