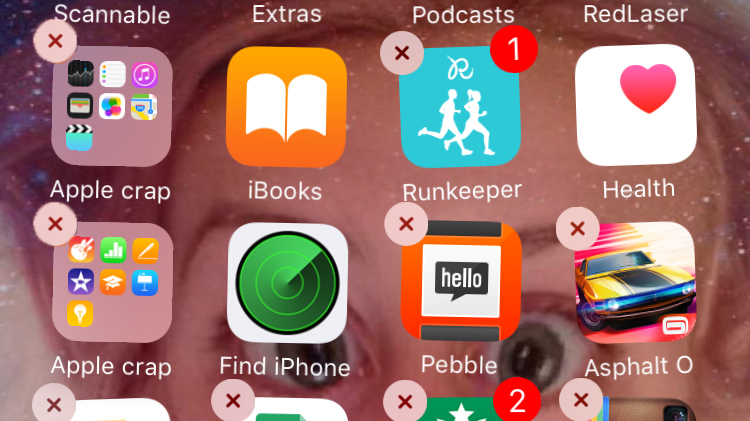 No longer will we hoard unwanted Apple apps in a folder on the iPhone home screen that we’re never going to open. No longer will we try to find clever tricks to make it look like we’re deleting all the Apple iOS default apps that we don’t want to use. And no longer will we complain that Apple doesn’t let us remove the iOS app we deem as bloatware.

It’s been widely reported that iOS 10 now lets you delete the Apple apps you don’t want to see on the screen, and it even comes without the Game Center app. Great news, right? Right!?

You’re about to be very angry… because it turns out you can’t really delete Apple’s preinstalled apps at all.

You can clear your home screen of a large number of iOS applications. Just delete them as you would delete third-party apps.

Talking to John Gruber, Apple’s senior execs Phil Schiller and Craig Federighi dove into some of Apple’s decisions for its upcoming software releases. They explained the focus on expanding the iMessage platform, the smarter Siri features, but also elaborated on how deleting default Apple apps in iOS 10 works.

It turns out that, because the way iOS is built, you aren’t really deleting iOS apps at all. Instead, only the user data and the necessary hooks are removed when you press that “X” button. The apps will remain installed on the device in a sort of dormant state, as they’re part of the signed packages that Apple uses to ensure the authenticity of the software, MacRumors says.

Whenever you choose to “re-download” them from the App Store, you’re simply re-linking the apps to iOS so that they can be used again. You won’t actually be downloading anything.

While this change is definitely welcomed, as it can help users clear their iPhone screens of unwanted junk, don’t expect to clear any storage space occupied by these Apple apps.

Furthermore, it’s still not clear what happens when items in other apps trigger a behavior that would invoke one of Apple’s default apps if that app is no longer “installed.” What happens if you click a link that would open a new email or calendar entry if the default email or calendar apps are gone? Will we get a prompt to install the appropriate app? Or will Apple let us choose default apps for various tasks?

Apple’s execs did not offer any answers to this important question, and if the final release is the same as the first beta, we have some bad news:

I just found out pic.twitter.com/pH50Pi12Xi

Of course, it’s entirely possible — even likely, perhaps — that this functionality will be refined ahead of iOS 10’s public release.