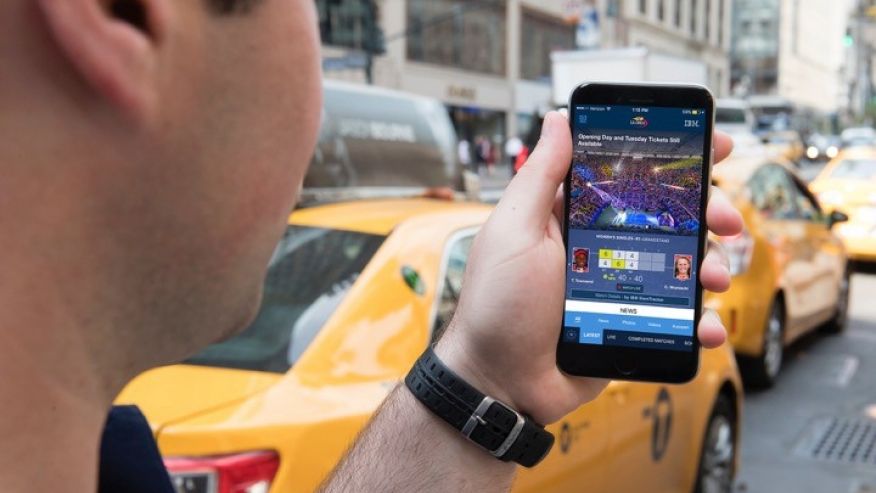 IBM’s Watson computing platform is holding court — cognitive court that is, in the platform’s U.S. Open tennis debut this year.

It’s the centerpiece for IBM’s first fan-facing activation in at least a decade; but Watson, well known for beating human champions in chess and on Jeopardy, is not only serving up cognitive insights for fans, it’s helping the U.S. Tennis Association (USTA) run the major tournament in Flushing Meadows, N.Y.

“We were looking at how we could help the (USTA) become more efficient and how we could help people from a fan experience standpoint,” Noah Syken, vice president of global sponsorships and client programs at IBM, told FoxNews.com.

Syken says the cognitive court commands some 1,000 square-feet at Billie Jean King National Tennis Center with eight different displays and demonstrations. There’s a sports insight area the IBM exec calls a “manifestation of what we’re doing with the Toronto Raptors to help them manage the team better through cognitive abilities.”

There’s also a virtual reality cycling experience with insights from hill training. The system also let visitors know when they’d arrive, and if on time, at a destination at their current virtual cycling rate. And of course there’s a social component, allowing fans to share their Twitter handle with Watson, which then analyzes their personality to match with a pro tennis player.

“We want people to understand how cognitive will affect their life in the future and spark their imagination,” Syken said, adding, “We want folks to get a hands-on experience.”

Take the 7 Train and watch the closing doors

In fact, some fans may interact with Watson before they even arrive at the tennis complex. The platform is included in the U.S. Open’s official app for iOS and Android and will “answer” questions typed into the guest services section starting with the best way to get to the venue, directions, food and drink options, services and facilities.

The Watson platform taps into the Natural Language API, an AI-infused app that allows the app to answer questions such as “Where can I get food?” It also learns over time what fans are most interested in and the clearest way to respond.

While tennis enthusiasts can download the free Watson-enabled mobile apps forApple iPad and iPhone, and Android devices to help them navigate to and around the U.S. Open, the apps also offer an interactive second-screen experience for fans watching the Open on TV.

In fact, IBM’s SlamTracker analytics technology will be available on mobile devices for the first time at the U.S. Open. It accesses 41 million data points collected over the past eight years of Grand Slam tennis and lets fans to analyze current and historical player, match and tournament data, including a unique baseline for “pressure situations.”

“There’s a new analysis on how players perform in pressure situations,”

Syken explains, “When Player A plays against Player B, what are the three characteristics they need to do to be successful, such as they need to reach a certain number of wins on the first serve. When Andy Murray has break point opportunities, which is a situation with a heightened level of pressure, how does he perform relative to his own history and to other players?”

In other words, it’s a deep dive into analytics for stat geeks (and maybe more than one journalist covering the action).

The computing platform will also aid the USTA in its media outreach efforts. Syken notes, “We’re teaching Watson to ‘see’ images from the USTA and easily identify people, easily recognizable people from tennis players to celebrities that visit the U.S. Open so it could recognize them and tag them and make the USTA’s content work more smoothly.”

And Syken says Watson is helping those with hearing disabilities who access content on www.USOpen.com. It listens to the broadcast and automatically types in captions that can be read.

This is all a push that IBM began at this year’s Master’s golf tournament as Watson goes more mainstream. “It’s the next era of computing and we want to give people and organizations an understanding of how Watson can help,” Syken says, adding, “We believe cognitive and Watson will help big companies engage better and it will touch everyday people as well.”

A few examples relevant to sports fans include integrating technology in the Atlanta Falcons’ new Mercedes-Benz Stadium that is slated to open next year. And for tennis players looking to ace the sport, Syken notes, “There are great companies that make connected rackets that kick off lots of data, but analysis is better than data alone [and] will allow the consumer to buy a connected racket with Wilson built in to let people be more successful in the way they train.”