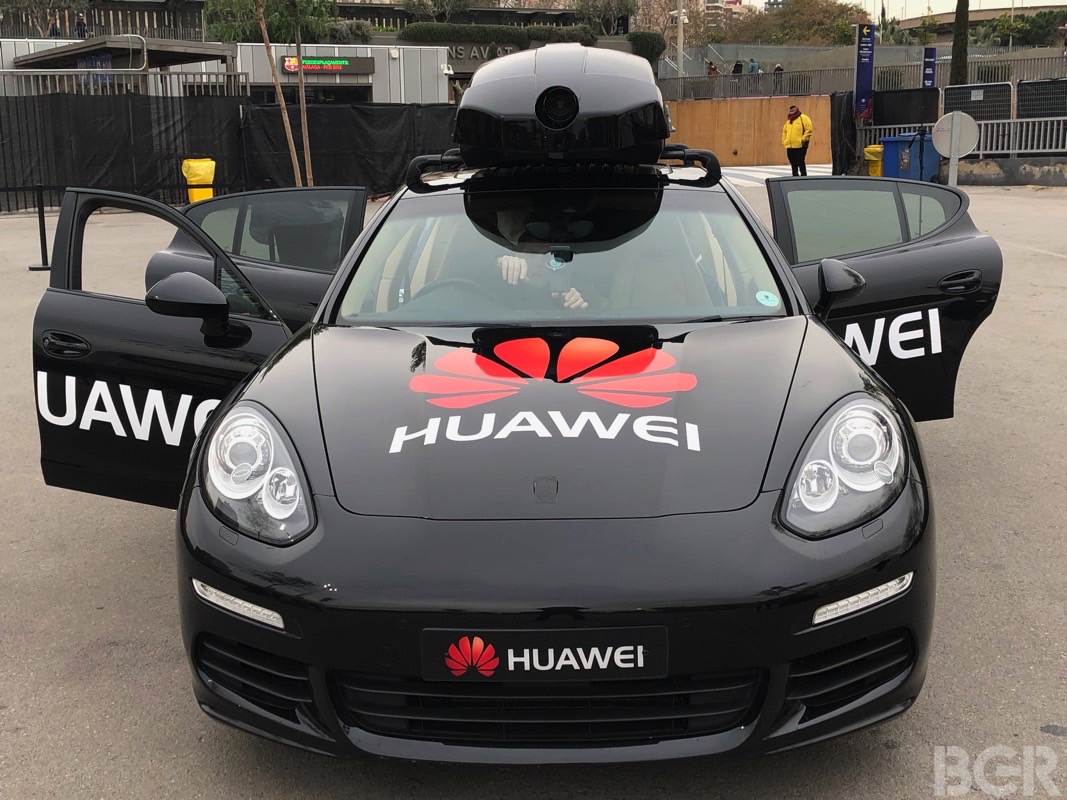 The Huawei Mate 10 Pro’s chip comes with AI features of its own, but not all people are familiar with AI, or what AI in a phone can be used for. That’s a problem Huawei set out to fix, giving itself five weeks to teach a Porsche Panamera to drive itself using the Mate 10 Pro’s Kirin 970 chip and its powerful object recognition AI.

The technology was shown off to the press at MWC 2018, and I got to spend three whole minutes at Barcelona’s Camp Nou stadium in this AI-driven car. Did it work? Yes, it did! Was I afraid for my life? Hell yes I was!

Before you get too excited about Huawei making smart cars in the future or partnering up with Porsche on such an endeavor, you should know that’s not the point of this particular demo.

The company used the Panamera because it had it on hand and the carmaker is a partner, but Porsche did not have any involvement with this one — notice that you can’t even see the front logo on the car.

The huge contraption on the roof isn’t housing any sort of hidden technology or scanners that make the self-driving possible. It’s just a regular camera that needs to be protected against rain or snow, and a sky compartment did the job.

Huawei’s Arne Herkelmann told me that the Mate 10 Pro’s camera would have been able to detect the objects on the road. But because the phone is behind the windshield, an external camera was used instead.

The camera is connected via HDMI to the Mate 10 Pro that’s docked inside the car, sending video to the phone in real time. That’s where the AI handles object recognition. The self-driving commands are then transmitted to the car, which uses robots to accelerate, steer, and brake.

It’s not a full-fledged self-driving car experience that I got to experience at MWC. Instead, I was treated to a 100-meter obstacle course that involved two runs.

On the first run, the car drove itself at practically walking speed as it ran the object detection program.

A press of the button on the phone’s screen is enough to start the car.

The camera then scans ahead and sees a bike. The phone can automatically detect more than 1,000 objects, Huawei says, and it all happens in real time, at 30fps.

Then the ball is recognized — and yes, it’s a pretty huge ball drawing. But the phone would be able to detect a regular-size soccer ball as well.

There was also a huge dog.

Once that’s done, the car comes to a halt and the driver takes back control as we get ready for the second round.

This time, I’m asked to select how the Porsche should behave in case it finds a biker, dog, or ball on the road. I select patterns for each scenario, not knowing which object will appear in front of me.

The driver, who’s also a passenger next to me, gives control back to the AI, which accelerates the car to 30mph. My heart sinks into my stomach almost instantly.

I’ve seen the demo, I know how the tech works, I know everything is safe, but adrenaline kicked in as soon as the car started the second lap.

Herkelmann said the car could go even faster and the AI would still be able to avoid any obstacle and then brake. But you need a proper course for that. It turns out it’s a biker at the end of the track. If only he or she would only move out of the way.

Alas, the object is there to stay, and the car steers to the left, avoiding it. The biker is blocked by the phone in the following picture, as the Porsche turns left to avoid it.

We’re all safe. The car comes to a halt exactly as programmed. It takes just three minutes from training the Mate 10 Pro to finishing the second lap.

Again, this isn’t the self-driving technology that’s being tested at Google, Uber or even Tesla. It’s just a concept meant to showcase what AI is, what it can do on a flagship phone like the Mate 10 Pro, and where mobile technology is heading.