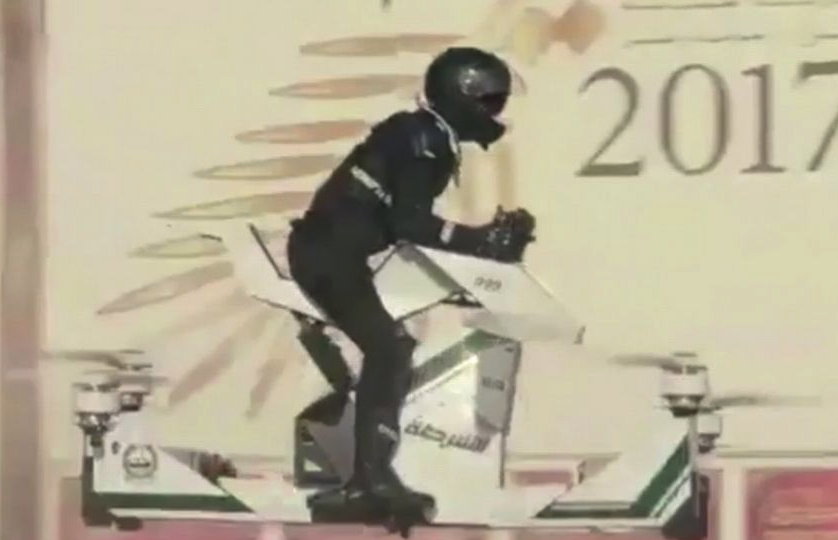 Back in the 1950s, everyone thought that by the year 2000 we’d be jetting around in flying cars. Nearly two decades late, we’re finally seeing the very beginnings of the systems and technologies that could make that dream a reality, and the Dubai police force is going to be one of the first to experience it. At the Gulf Information Technology Exposition, an incredibly cool hoverbike stole the show, and it could become the ultimate tool for first responders.

The bike, built by a Russian company called Hoversurf, is like a ridable drone, complete with four propellers that give it stable lift and allow it to perform some basic, but impressive maneuvers with a fully-geared pilot on board. But its impressive appearance belies some very real limitations that will ensure police cars remain the standard for a long time to come.

On the upside, the bike is capable of a very respectable top speed of 43 miles per hour, and considering it’s not constrained to pavement, it can head to its destination in a straight line rather than navigating roadways. Unfortunately, it has a rather short 25 minutes of flight time before needing to recharge, and on top of that, its altitude is limited to 16 feet.

This isn’t the kind of vehicle that will be chasing down criminals on the highway or even patrolling from on high, but it could be extremely useful as a tool for first responders who need to access difficult-to-reach areas. It can cruise over packed city streets much faster than a police car could pass through them, and could give cops a big advantage if ground-bound bad guys find themselves cornered.

Hoverbikes might never be the future of transportation for most, but this is a very cool implementation of the technology. That said, it’s unlikely you’ll be seeing cops on man-sized drones in the US, Europe, or pretty much anywhere else, thanks to strict laws regarding personal aircraft.